“Oh, it was awful master. Those horrible Kongs threw nasty barrels at me that went bang. Knocked me into the lava, they did. And I've singed both my wings.”
—Dogadon, Donkey Kong 64

Dogadon is a large dragonfly with the body of a dragon, and he is both the second and fifth boss of Donkey Kong 64. Dogadon is first fought by Diddy Kong in Angry Aztec and later Chunky Kong in Fungi Forest.

Dogadon has four legs that each have three claws and spikes lined up on his spine and long arrowhead tail. Dogadon is fought in the same location twice: in an enclosed subterranean location with a large, square-shaped stone column taking up most of the area. The column is partially submerged into the lava. However, the walls appear differently from the first to second battle.

At Troff 'N' Scoff, the Kongs are required to feed 120 bananas to Scoff, allowing Troff to unlock the boss door. It selects Diddy Kong as the one to fight Dogadon.

In the arena, a brief cutscene zooms into Diddy, who is being by a dragonfly resembling a smaller Dogadon. Diddy jumps at the dragonfly twice, then squishes it with his hands, and stomps it flat. Afterward, Diddy hears a vibrating noise and a growl behind him. He turns around and notices Dogadon, who lets out a roar. Diddy jumps in panic, and the battle begins.

Dogadon as seen in Angry Aztec.

Dogadon hovers to the other side of the arena, individually spitting out five fireballs at Diddy. After this, Dogadon lands on a corner of the stone platform, appearing to scold Diddy. Diddy must throw a TNT Barrel at Dogadon, knocking him backward into the lava. Dogadon quickly moves to the adjacent corner and suddenly bursts back into the air. He spins himself around to douse the flames on his body. If Diddy fails to hit Dogadon on time, he flies to the next corner and continues to blast fireballs from there.

For the second round, Dogadon spits fireballs at a faster rate. Dogadon now fires out ten fireballs in total, though he continues to spit fireballs in groups of five: after spitting out the fifth one, Dogadon flies to the next corner where he spits the next five at Diddy. When he lands, Diddy must quickly throw another TNT Barrel at Dogadon. The third round follows the same pattern except that Dogadon blasts his fireballs even faster; he shoots out a total of 15 fireballs, five per each of the three corners.

After being blasted a third time, Dogadon gets defeated and falls back into the lava, relinquishing the second Boss Key as he is falling.

To fight Dogadon a second time at Fungi Forest, the Kongs must feed 300 Bananas to Scoff, allowing Troff to reopen the boss door. The door selects Chunky Kong for the rematch against Dogadon.

When Chunky enters the boss fight, he hears stomping and nervously looks around. Dogadon emerges out from the lava, slowly climbs back onto the platform, then creeps behind Chunky, and finally lets out a roar. Chunky turns around and grovels in fear. Dogadon flies to a corner of the stage, and the battle starts.

The entire battle is mostly the same as in the first battle, but with a few exceptions. After taking damage once, Dogadon can perform a shockwave attack after finishing his fireball assault; the shockwave attack can be interrupted by a TNT Barrel though. When Dogadon takes damage twice, after he shoots fifteen fireballs at the player, he'll inhale deeply, with yellow rays appearing from his chest, and spit out a large blast of fire. It shapes itself into a large wall of fire that slowly moves toward Chunky; he can only avoid it by jumping around it from a ledge. Chunky must then quickly throw another TNT Barrel at Dogadon, who, like usual, falls into the lava and moves to the adjacent corner.

After returning on the stage, Dogadon flies in a circle, then stomps on the platform three times. The stage platform starts to slowly sink in the lava, and the screen begins to vibrate. Dogadon points at Chunky, appearing to be scolding him. The boss battle essentially becomes a timed one, as Chunky must defeat Dogadon before sinking into the lava, which is fatal upon contact. It takes about 100 seconds for the platform to sink in the lava entirely.

Dogadon spits out five more fireballs at Chunky. However, when Chunky hits Dogadon a fourth time, it does not fall backward into the lava. It just lets out a lengthy screech, and a Chunky Barrel appears in place of the TNT Barrel. Chunky must go into the barrel to utilize his Hunky Chunky ability and throw a series of punches or Primate Punches at Dogadon. After a few seconds, Dogadon recovers and continues spitting fireballs at a fast rate toward Chunky. The pattern repeats until Chunky punches Dogadon enough times, usually being after four or five more rounds.

After taking a final hit, Dogadon is flung backward into the wall. It lets out a final scream (and appears to be attempting another fire wall), but suddenly falls into the lava. As the lava is bubbling, Dogadon's head emerges briefly, looking at his body burning in flames. He shakes his fist at Chunky, and lets out a last scream before sinking into the lava, marking his ultimate defeat. The fifth Boss Key jumps out of the lava and onto the platform. The platform stops sinking, allowing Chunky to safely collect the Boss Key. 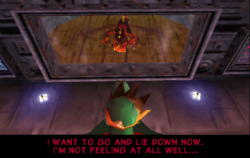 When the Kongs first enter Crystal Caves, a cutscene shows King K. Rool, who is confident that his "fiery little pet" (Dogadon) has defeated the Kongs. The viewing area in front of K. Rool's throne opens, and Dogadon peeks out from the corner. As Dogadon comes walks into view, K. Rool notices him and asks Dogadon if he has dealt with the Kongs. Dogadon describes the awful experience he has had, including how the Kongs threw TNT barrels at him, knocked him into the lava, and that his wings have been singed. He refers to how Chunky punched him, "One of them got really big and punched me in the face" and his broken nose. The window closes, and Dogadon says that he needs to lie down from feeling completely unwell.

Dogadon's last appearance is at about two minutes in the 101% secret ending, where a 15-second take shows him roaring at Diddy. Dogadon then notices a small, yellow Gnawty behind him, and he flees behind Diddy. Dogadon is crying while the Gnawty makes squeaking noises at him.