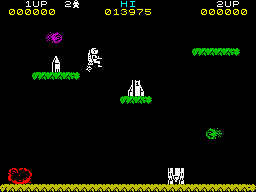 The Jetpac minigame in Donkey Kong 64

“Back again, Donkey? How about another go on my Jetpac game, huh?”
—Professor Cranky Kong, Donkey Kong 64

Jetpac is a ZX Spectrum game. In the game, the player plays as an astronaut trying to repair his space ship while avoiding aliens. The astronaut has to collect all the pieces for his ship and fuel while blasting aliens with his laser gun. Each part of the ship is worth 100 points when retrieved and each alien is worth 25 points when blasted. The "Jetpac" game is an actual real world game that was the first creation of Rare in 1983, at the time of its release known as Ultimate Play the Game.

Jetpac is made playable in Donkey Kong 64 as a test by Professor Cranky Kong in his lab after the player gets 15 Banana Medals. In this version of the game, the player must score 5000 points within 3 lives to cause a Rareware Coin to start spawning and then collect the Coins while it spawns. Jetpac can also be played from the Mystery option, where it is unlocked after collecting six Banana Fairies.