Golden Bananas are large, shiny bananas that first appear in the Donkey Kong Country animated series, and later in their first in-game appearance in Mario Party and more prominently in Donkey Kong 64. They often appear as collectible items.

The Donkey Kong Country animated series features a single Golden Banana of a different type in the episode "Raiders of the Lost Banana". This Golden Banana is found by DK in Inka Dinka Doo's Temple, and he decides to give it to Candy Kong as a present. As a result, however, DK sets off a curse that befalls anyone nearby the beholder. K. Rool later kidnaps Candy and demands she hand over the banana, but DK shows up to rescue her and returns the banana to Inka Dinka Doo. However, Polly Roger then steals the banana back, but now only K. Rool is affected by the curse.

Golden Banana with the Rareware sticker

In Donkey Kong 64, Golden Bananas, or Gold Bananas,[1] are the main collectible items. They are also Donkey Kong's supply of bananas that he keeps in his banana hoard. They are imprinted with a Nintendo 64 sticker.

During the opening sequence, King K. Rool orders the Kremlings to steal the Golden Bananas and kidnap the other four Kongs (who are later freed) in an attempt to distract Donkey Kong while they repair the Blast-o-Matic. B. Locker is assigned by K. Rool to block the Kongs from entering the other worlds; however, B. Locker allows them to enter if they have at least a minimum of a certain number of Golden Bananas (the requirement is different for each world).

A golden Banana bunch appears as the early HUD icon for the Golden Banana in the kiosk demo; it appears if players win Diddy Kong's Mine Cart mini-game. A single frame of the icon appears in the final game, as the emblem on B. Locker's head.

Despite being the first explicit appearance of Golden Bananas in a game, the manual implies that they were part of the banana hoard previously.[2][3]

Golden Bananas appear in Donkey Kong Barrel Blast, where they are found after passing over a Surprise Panel and are worth fifty bananas when collected.

In Donkey Kong Country Returns, a single Golden Banana makes an appearance. While leaving Cranky Kong's Shop, Cranky Kong can sometimes ramble about finding a Golden Banana that transports one to another dimension. After accessing the Golden Temple via the Rare Orbs, Donkey Kong and Diddy Kong are surprised to see the giant Golden Banana, held by two golden DK-like statues. Peeling its skin and tasting it does indeed transport them to another world.

A Golden Banana statue based on its appearance from Donkey Kong Country Returns appears in Mario Kart 7 in the course DK Jungle, inside the Golden Temple section near the exit.

The Golden Banana statue reappears in Mario Kart 8 and Mario Kart 8 Deluxe as DK Jungle appears as a retro course. It now appears in the anti-gravity section of the inner Golden Temple section, and it spins.

"Gold Bananas" appear as an item in Mario Kart Arcade GP DX. It can only be dropped from behind. If the player comes in contact, it causes their kart to spin out, making it difficult to operate for a certain period of time. Triple Gold Bananas are also available.

A golden banana in clusters makes their game debut in Mario Party as the mysterious treasure that is locked away in the ancient ruins of DK's Jungle Adventure. At the end of the game, during the award ceremony, the winning player's stars form a giant Star which flies to the stone chest at the upper-left part of the board, which reveals the treasure.

Golden bananas appear in Mario Party 4 in the mini-game Tree Stomp. Ukikis will occasionally throw them, which can speed up any character who touches them. 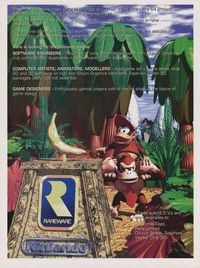