The name plays off the phrase "best of friends," a term which describes two friends that are really close to each other.

At the start of the episode, Diddy enters Cranky's Cabin, and gets surprised seeing Donkey Kong mopping the floor. DK looks inside a chest, just to fall into it. Diddy helps him to get out. Donkey Kong finds a candy Cranky Kong gave to him when he was a kid, but Diddy ignores it to warn that a picture is stuck on his back. The picture shows Cranky and King K. Rool friendly together, which makes them amazed. Cranky arrives, and angrily pulls the picture out of DK's hands. After asked curiously, the old ape tells them he and K. Rool were once friends in a similar manner to Donkey and Diddy, but became enemies because of K. Rool cheating in a contest, and then leaves. Diddy and Donkey Kong decide they will try to make them friends again, so the Kremlings would stop stealing the Crystal Coconut.

At King K. Rool's lair, the king is painting a picture of Krusha. General Klump arrives at full speed with a letter. However, he crashes into King K. Rool, ruining the painting. General reads the letter that is believed to be from Cranky, but K. Rool isn't convinced, thinking it's a trap, and orders him to get rid of the it. DK had been hiding behind a mine cart watching the whole thing, exclaiming to himself "Nuts! Close, but no banana!"

In Donkey Kong's treehouse, DK tells Diddy the letter failed. So, Diddy comes up with a "plan B". Rushing inside Cranky's Cabin, the little monkey frantically warns Cranky of a disaster happening in the jungle and both leave. Meanwhile, at K. Rool's hideout, King K. Rool is sleeping, but is awakened by Donkey Kong, who is wearing his crown. The angered king demands DK to give it back, and chases the cheeky primate to the jungle. Diddy and Donkey are hidden in the jungle after bumping into each other. King K. Rool and Cranky meet, and blame each other for the mess, making the observing monkeys worried. However, after talking a little and seeing some pictures, they begin laughing, and sing a song about being friends again.

Back to the cabin, Donkey Kong and Diddy are resting when King K. Rool visits them. Donkey Kong wants to fight, but the king says he and Cranky would like to give them a "banana cream pie surprise" for making him and Cranky friends. The ape eats the pie, and it explodes. Cranky and King K. Rool laugh at him and leave. Back at the Kremling Lair, General Klump wants someone to give him orders as K. Rool is not there, and asks for help to Krusha. However, Krusha wasn't able to help in any way. In Bluster Barrelworks, Bluster and Candy learn that Cranky and K. Rool are bowling the barrels. Bluster faints and Candy gets mad because the vacation she was planning to take after work will now be canceled. The pranksters don't care and run off.

DK is talking to Candy about what happened to him, but Cranky hinders them playing jungle golf with K. Rool. Candy brings her boyfriend another banana cream pie, but Cranky's coconut ruins it. She is now mad at DK, thinking it's his fault anyway. Donkey goes to his house to talk to Diddy, but Cranky and K. Rool scare them flying around in Bluster's barrelcopter.

Candy, Funky, Bluster, Donkey Kong and Diddy meet themselves near the house. Cranky Kong and King K. Rool have become a threat and nuisance to the island with their antics. Everyone decides DK has to break them up. Following them, Diddy and Donkey Kong are accidentally trapped by Klump and Krusha, who were actually supposed to trap K. Rool and Cranky. Wanting their respective leaders back to their normal selves, the two sides form an alliance. In song, DK and Klump come up with a plan to get Cranky and K. Rool to compete in a contest where K. Rool will use foul play, thus terminating their friendship for good. 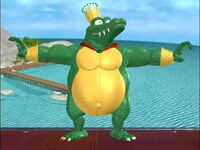 They confront the head of their group together, asking them what contest they had before their friendship broke off. It turns out to be the most extreme one, balancing on the wings of a flying plane. Thinking the two will endanger their lives, they decide to withheld them from the competition. At the Kremlings' lair, Klump and Krusha restrain King K. Rool to charge him with treason. But the king reveals he is just pretending to be friends with Cranky to get his revenge and claim his prize.

In the competition, King K. Rool goes first. To win, he drives a hole on the plane before Cranky's turn. DK eventually traps Cranky in a barrel to prevent him from taking part of the contest because it's too dangerous, even more with K. Rool's sneaky tricks.

Donkey Kong pretends to be Cranky and participate in the contest, but Cranky's hologram is on the plane already. The airplane starts falling, as King K. Rool celebrates. Cranky himself arrives with the Crystal Coconut and an umbrella, and accuses the king of cheating. Both start fighting for their "symbolic umbrella" and become enemies again. Donkey Kong and Klump congratulate each other on the success. Donkey Kong then threatens to "Banana Slamma!" Klump if he ever sees him again, who returns one of his own. As they depart, they salute, possibly meaning that they are also friends despite still being enemies.