I Spy With My Hairy Eye

"I Spy With My Hairy Eye" is the nineteenth episode of the Donkey Kong Country television series. It was the first episode aired in North America and premiered on August 15, 1998. During the episode, King K. Rool once again uses a robot double of Candy Kong, whom he calls the "Candy Clone," to attempt to steal the Crystal Coconut and take over Kongo Bongo Island.

The episode begins with Donkey and Diddy Kong watching over the Crystal Coconut. Diddy complains about his job, as both he and Donkey Kong are starved. Donkey Kong looks through the refrigerator, only to find an empty banana peel. After he wishes he had just one banana, the Crystal Coconut grants his wish and places a new banana in his hand. Diddy encourages Donkey to wish for more, even though the ape is not content with fooling around with the Coconut. Once he is persuaded enough, Donkey Kong wishes for a whole bunch of bananas, causing a pile of bananas to drop on top of him.

Just then, Diddy notices Cranky Kong coming and the two Kongs have no way of hiding all the bananas to keep him from knowing that they were using the Coconut. Diddy Kong, in his panic, accidentally wishes that he was invisible and quickly disappears. Donkey Kong is stunned by this, and has no idea where Diddy is, until he starts tickling him. Cranky enters the room, angry at the sight of all the bananas. He commands Donkey Kong to clean it up, but Diddy continues to tickle the ape. As Donkey Kong attempts to clean the mess, the invisible Diddy picks up a ping-pong paddle and tries the whack Cranky with it. Donkey Kong pushes Cranky out of the way before he is hit, but then Diddy escapes. Donkey Kong chases him, leaving the mess at Cranky's Cabin. 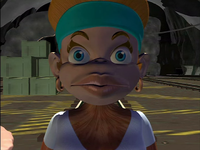 Meanwhile, at King K. Rool's hideout, General Klump is accidentally pushed into a vault by Krusha. King K. Rool tells him that he will be needing the vault for later and requests that he get out, but Klump doesn't know the secret password to open it. Once the crocodile king yells the password (after telling his minions to cover their ears), the safe opens, and King K. Rool explains to General Klump that the vault is only for the Crystal Coconut. Klump tells him that they do not have the Coconut anyway, so King K. Rool replies by explaining his plans to them, announcing that he does not need their help this time. He then explains that every Tuesday, Candy Kong gives Cranky Kong a banana cream pie, and quickly shows them Candy's robot twin, Candy Clone. The two Kremlings think that the clone is Candy at first, and therefore believe that any idiot could fall for King K. Rool's trick.

Later, Donkey Kong heads into his treehouse, only to run into Diddy Kong. Donkey Kong tells the young monkey to stop his tricks, but Diddy is too overwhelmed by his invisibility and enjoys it too much. He and Donkey Kong begin to sing about what he can do while being invisible, and Donkey Kong tries to warn him about getting caught. When the song is over, Donkey Kong tries to persuade Diddy to become visible by telling him that, "It won't be fun when Cranky finds out that we've been messing with the Crystal Coconut." He tells him to wish he could be visible again while he distracts Cranky, but Diddy ignores him and leaves the treehouse, making the ape angry.

Diddy Kong heads to the beach, where Funky Kong is pretending to surf on the edge of the port. Diddy, acting as an "inner voice" of Funky's, tells him that his moves are "all wrong," and informs the ape on how to surf "the right way." Funky asks, "How am I looking now?" as Donkey Kong approaches. The ape replies with "like a big goofus doofus," and Funky suddenly loses balance, falling into the water. Donkey asks Funky if he has seen Diddy, but quickly answers his question, saying, "Of course you haven't, he's invisible." The ape suddenly becomes excited, as he has just remembered that it is Tuesday - banana cream pie day. As he approaches Candy's home, Diddy runs off with the pie, and Donkey Kong wonders where the pie is when he reaches the table by the door. Candy comes by with another banana cream pie, stunned to find that the last pie she has baked is missing. Candy blames Donkey Kong for eating Cranky's pie, but Donkey Kong denies that he ate it, saying that it was Diddy. However, she does not believe him and instead takes her newly baked pie to Cranky.

Meanwhile, King K. Rool speaks to General Klump and the Candy Clone, who are in the jungle, through a computer monitor-like device. The crocodile king begins to command the clone to give her banana cream pie to Cranky and then take the Crystal Coconut. The robot obeys and heads to Cranky's Cabin, with Klump keeping his eye on her.

Cranky Kong finishes cleaning the bananas in his cabin, tired out as a result. The door opens, scattering some of the peels again, and the old ape turns around in fury, but it quickly changes to delight when he sees Candy (Clone) with her banana cream pie, and gladly accepts the dessert; as he walks over to get his pie, however, he drops his broom, the banging it makes as it hits the ground revealing the Crystal Coconut. As he prepares to eat it, the clone steals the Crystal Coconut. By the time Cranky notices this, she has already left, so Cranky calls for Donkey Kong. The ape thinks he is questioning him about messing with the Coconut, and states that he can explain everything. Cranky thinks that he is talking about Candy stealing the Crystal Coconut. As he says this, the real Candy marches in an denies that she stole it, once again accusing Donkey Kong of stealing her pie. Donkey Kong explains that it was Diddy who had stolen the pie, though Cranky misinterprets what he says to think that Diddy stole the Crystal Coconut, prompting the invisible monkey to deny this. Surprised, Cranky runs into Donkey Kong, who consequently and accidentally kicks Diddy into a desk. Diddy decides that DK should explain what happened, and Donkey Kong comes clean, explaining everything. As the Kongs start to argue over who stole the Crystal Coconut, however, Donkey Kong silences them, asking who actually stole it. Meanwhile, King K. Rool celebrates his victory over the Kongs when he views the Candy Clone with the Crystal Coconut on his monitor.

At Cranky's Cabin, Cranky Kong announces that Diddy Kong cannot becomes visible again without the Crystal Coconut. Diddy Kong begins to cry when he hears this, so Donkey Kong tries to cheer him up, poking his other eye on accident instead. The two Kongs decide to search for the Crystal Coconut, running to Funky's Flights. Once there, Funky allows them to fly his biplane 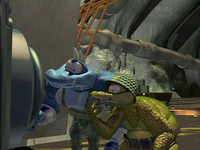 General Klump and Krusha hear King K. Rool from within the vault.

At King K. Rool's hideout, the Candy Clone approaches the crocodile king with the Crystal Coconut. Before he is able to grab it, however, he states that afterward he will go on a "nice, long stroll"; the Candy Clone hears this, and walks away from K. Rool to do so. Additionally, Klump and Krusha arrive immediately after, accidentally closing the vault on K. Rool. Klump and Krusha learn that he is stuck when they walk by, but the king decides to, instead of simply blowing his top, recite the password and open the vault before yelling at the two, though announces that he has forgotten the password as soon as he attempts to. They panic, and before they can start searching for the Crystal Coconut, Donkey Kong leaps out of Funky's biplane, threatening them to give him the Crystal Coconut. After King K. Rool, outrages again, Donkey Kong asks him where the Candy Clone is; afterward, it can be seen that she is walking through a snowy landscape.

King K. Rool sends out Klump to find the Crystal Coconut, while Donkey and Funky are flying in the biplane to find it as well. Meanwhile, Eddie the Mean Old Yeti spots Candy Clone in the snow and instantly falls in love with her. The ape sings a song about him and his feeling for her, just before Donkey, Diddy, and Funky Kong notice the clone and land to get the Coconut back. Back at the Kremling hideout, King K. Rool is repeatedly trying to guess his password correctly. General Klump rides in his mine cart into the area, realizing that he has taken a wrong turn. King K. Rool yells at him, so the crocodile retreats to search for the Crystal Coconut again.

While Eddie the Mean Old Yeti chases Donkey Kong around the icy area, Diddy Kong snatches the Crystal Coconut from the Candy Clones hands. However, he soon runs into Eddie, who catches the Coconut. Just then, Klump races out of the mines in his cart, almost crashing in Eddie. This distracts the ape, allowing Diddy to take the Crystal Coconut from him again. As the monkey runs from Eddie, he wishes he was visible again. His wish is granted, and the young monkey celebrates, until Eddie dashes towards him. Frightened, Diddy throws the Crystal Coconut to Donkey Kong, who misses it. The Coconut bounces into a pile of snow, and both Eddie and Donkey Kong chase it. Donkey Kong kicks into into the air before Eddie can grab it, and the object flies directly into Cranky's Cabin over in the jungle. Cranky is relived to have the Coconut back, but back on the mountains, Donkey and Diddy are chased by Eddie as they head to the biplane. They call for the Candy Clone before getting caught, so Eddie notices her and runs after her instead. The Kongs jump into the biplane safely, with Funky stunned to suddenly see Diddy with them. 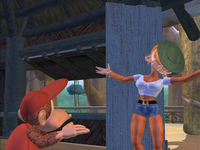 Candy Kong with the banana cream pie in her face.

At King K. Rool's hideout, the crocodile king finally remembers his password and frees himself from the vault. However, as he walks out, General Klump rides into him and Krusha in a mine cart, which is running out of control. The three Kremlings fall into the vault and become stuck once again. Meanwhile at Cranky's Cabin, Donkey and Diddy learn their lesson and Cranky heads out to perform some errands, with the two Kongs watching the Crystal Coconut again. After he leaves, Candy walks in and offers them a banana cream pie. Diddy Kong thinks this is another trick of King K. Rool and smashes the pie in her face. When he realizes that this is really the real Candy, he races out of the cabin, so Candy smashes the remaining parts of the pie into Donkey Kong, even though he did not do anything.