The Candy Clone is a robotic double of Candy Kong in the Donkey Kong Country animated series. She appears in three episodes and is under the command of King K. Rool. Despite her robotic voice, her appearance is identical to Candy Kong, so much so that even Candy Kong's friends, Donkey Kong and Diddy, did not notice anything different. 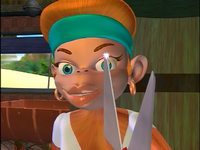 The Candy Clone with scissors 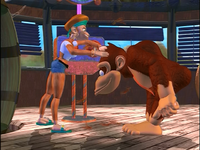 Chronologically, Candy Clone makes her first appearance in "Bad Hair Day". In this episode, K. Rool uses it to place a curse on Donkey Kong by cutting all the hair off his head. It later appeared with the real Candy at the end of the episode, wanting to give Donkey Kong a present for being a hero. He mistakenly chooses this Candy as the real one, earning him scorn from the actual Candy Kong. However, when they are about to kiss, the robot's head is blown off.

The Candy Clone reappears in the episode "Speed", deployed by K. Rool once more.

I Spy with My Hairy Eye[edit]

In "I Spy with My Hairy Eye", King K. Rool uses the apparently repaired Candy Clone to cheat the Kongs and steal the Crystal Coconut. The robot gets the Coconut and goes to the White Mountains, where Eddie the Mean Old Yeti develops a passion for it. Candy Clone seems less intelligent in this appearance, and her personality is nonexistent, most likely because her AI was not repaired properly.

The Candy Clone does not appear in "To the Moon Baboon", but is mentioned by Krusha when he and Klump report to King K. Rool about Cranky Kong's film.