“The snowcapped peaks of Donkey Kong Country are rarely climbed due to the hazardous conditions found at such high elevations. The ground is like solid ice and does not offer a firm foothold for the explorer. Blinding blizzards often strike without warning. The resulting lack of visibility can make the already challenging obstacles in this area next to impossible!”
—Donkey Kong Country instruction booklet, page 21

Gorilla Glacier is the fourth world in Donkey Kong Country and an arctic wasteland found on the peak of Donkey Kong Island.

There are many ice caves and deep ravines featured in the world, including a treetop village. Most of the levels have icy, slippery ground that cause Donkey Kong and Diddy Kong to slightly lose traction. In most levels, there is a 3-D effect of snow and dynamic backgrounds. In the Game Boy Advance version, some of the effects were removed or edited from the levels, and some of the levels were rearranged in a different order from the redesigned world map. One of the levels is the first and only location that the Kongs meet their Animal Friend, Squawks.

Gorilla Glacier appears to be the mountainous counterpart to the Volcano world from Donkey Kong Country Returns. When asked if they were the same region, senior designer Kynan Pearon approved of the idea.[1] However, the Cliff world uses arranged versions of Gorilla Glacier's music.

In the Donkey Kong Country cartoon, the Gorilla Glacier portion of Kongo Bongo Island is referred to as the White Mountains. This area is the home of Eddie the Mean Old Yeti and is otherwise fairly barren of features. 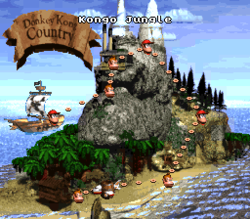