“You wouldn't know it by looking at him, but Winky is one of the most powerful animals. He can jump higher than any of them, and with his strong legs, he can jump attack some enemies that even Donkey can't touch. Winky is fond of damp, dark places, but he is known to turn up almost anywhere!”
—Donkey Kong Country instruction booklet, page 25 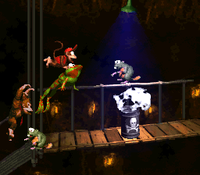 In Donkey Kong Country, Winky only appears in a few levels, three of which are in Monkey Mines. He first appears in Winky's Walkway, which is named after him. As the level's name implies, Winky is the main feature. Winky has the ability to jump higher than the Kongs, which is useful for reaching collectibles such as Bananas or Extra Life Balloons. He has the ability to defeat Zingers by jumping on them.

His second appearance is in Bouncy Bonanza, and his animal crate appears in a small room shortly after the Star Barrel. He can jump high enough to enter the last Bonus Area of the level. Winky's third appearance is in Millstone Mayhem, and his crate is located on a pathway that can be reached via a tire. He is last found in the first Bonus Area of Rope Bridge Rumble, of Gorilla Glacier.

In Donkey Kong Country 2: Diddy's Kong Quest, a Winky figure makes a cameo in the background of the Monkey Museum, priced at five dollars. This cameo was removed from Cranky's Hut in the Game Boy Advance remake, although a small Winky is contained in a cage, which it hops around in. These smaller variants also hop around in the swamp-themed stages of Krem Quay.

Cranky also mentioned Winky and Expresso in the Super Nintendo version's instruction manual by saying, "A more tragic looking bunch of useless no-hopers you'll never see! I liked Expresso and Winky--where have they gone?". His appreciation of both Animal Friends is shown from their figurines in his Monkey Museum, or keeping a pet of each in the Game Boy Advance remake.

Although Winky does not appear in the game, Cranky mentions him and Expresso in the Donkey Kong 64 instruction manual in hopes of their reappearance, "I just hope they've included poor old Winky and Expresso this time instead of that bone-brained rhino that always seems to get in the games."

In the Club Nintendo comic "Donkey Kong in: Banana Day 24", Cranky and Kiddy Kong are briefly seen riding Winky to an airport.

Winky makes a cameo appearance in Picross NP Vol. 8 as one of the images that must be cleared.

Some Winkys swimming outside the campgrounds in Donkey Konga 3

In Donkey Konga 3, multiple Winkys appear swimming in the waters of the campground portion of the summer background.

In Super Smash Bros. Brawl, Winky is mentioned in the PAL version of Kass' trophy description.

Winky appears as a trophy in Super Smash Bros. for Wii U.

Winky appears as a spirit in Super Smash Bros. Ultimate.

In the Donkey Kong Adventure story of Mario + Rabbids Kingdom Battle, the design of Rabbid Cranky's Croaker Disposer is based on Winky the Frog. The weapon's flavor text reads: "Whether it's Monkey Mines or monkey shines, Winky is always BOUNCING with enthusiasm.", referencing the first area in the original Donkey Kong Country where Winky can be found. The weapon is also described as an officially licensed Barrel Bolt.