Mini-Neckys[1][2] (alternately pluralized as Mini-Neckies)[3] are a smaller variant of Neckys and recurring enemies in the Donkey Kong franchise. They first appear in Donkey Kong Country, but have since appeared in more games than Neckys.

In Donkey Kong Country, Mini-Neckys (also referred to as Necky Jnr's on one occasion)[4] attack Donkey Kong and Diddy Kong by spitting out coconuts, which move horizontally in the Kongs' direction. Some Mini-Neckys move up and down while spitting out coconuts. The Kongs can defeat a Mini-Necky in the same way as a Necky: either by jumping on them or by hitting them with a barrel. However, if the barrel hits one of Mini-Necky's coconuts, it breaks. Mini-Neckys appear in four levels: Vulture Culture, Ice Age Alley, Trick Track Trek, and Elevator Antics.

In the Game Boy Advance version, Donkey Kong can obtain the photograph of Mini-Necky by performing a Hand Slap in the center of the boss level, Necky's Nuts.

Mini-Neckys make another appearance in Donkey Kong Land where they have the same role as in Donkey Kong Country. They also appear in four levels: Deck Trek, Landslide Leap, Kong Krazy, and Fast Barrel Blast. 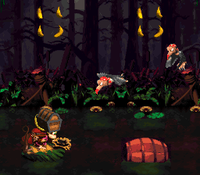 Two Mini-Neckys swoop at the Kongs in Mudhole Marsh, a level in Donkey Kong Country 2

Unlike Zingers, Mini-Neckys act different than in Donkey Kong Country. When a Mini-Necky notices Diddy and Dixie Kong, it swoops down, attempting to hit them. They also have a deeper voice than in the previous game.

The game also features a large Mini-Necky boss, Krow, who is later fought as Kreepy Krow. The latter's identically titled boss level features several ghostly Mini-Neckys which swoop at the Kongs individually; only one of them is normal, and the Kongs must jump on that one to make a barrel appear. The Kongs can throw the barrel at Kreepy Krow to attack him.

During the ending's Cast of Characters, a Mini-Necky appears under the Lazy Landlubbers category.

Mini-Neckys appear in many levels, more than in Donkey Kong Country:

In Donkey Kong Land 2, they are named Neckys,[5][6] and retain their behavior from Donkey Kong Country 2: Diddy's Kong Quest. They only appear in two levels, Kannon's Klaim and Mudhole Marsh. Krow and his undead alias, Kreepy Krow, also return as bosses. Neckys also appear in the game's Kreepy Krow battle with the same role as before. Because of the Game Boy color's monochromatic palette, regular Neckys cannot be distinguished from their ghostly variant.

During the ending, a Necky appears in "The Baddies" category.

Mini-Neckys appear as blue balloon items in Donkey Kong Barrel Blast. When used by a racer, the Mini-Necky homes in on the nearest opponent behind the racer and rams into them. This results in the opponent losing ten bananas. If a Kremling uses a Mini-Necky, the opponent also loses a Wild Move.