Hogwash the Flying Pig[1], or simply Hogwash[2][3], is a species of flying pigs who appear as enemies in Donkey Kong Land and its loosely related children's novel, Donkey Kong Country: Rumble in the Jungle. Hogwash shares a name with the term "hogwash", which expresses nonsense or bunk. Their ability to fly is derived from the idiom "when pigs fly", when someone believes that something is not possible.

Hogwashes are notable for being one of the few enemies who appear in Donkey Kong Land but not in the Donkey Kong Country series of games. During the development of Donkey Kong Land, Hogwashes were known as Rashers[4], a term for bacon used chiefly in the United Kingdom and Ireland.

In Donkey Kong Land, Hogwashes are common enemies who appear in many levels. They fly around in the sky, usually in a horizontal direction, but may also move back and forth. Hogwashes act the same as Neckies, as Donkey Kong or Diddy Kong can defeat a Hogwash by jumping on it, which also boosts them to a higher area.

“Those pigs must be the Krem-dudes' newest experiment.”
—Funky Kong, Donkey Kong Country: Rumble in the Jungle 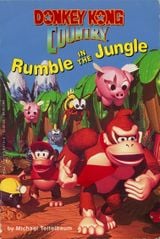 The front cover of the novel displays two Hogwashes.

In the 1995 novel Donkey Kong Country: Rumble in the Jungle loosely based on Donkey Kong Land, a swarm of Hogwashes (referred to as "flying pigs") are revealed to have shot explosive cannonballs at Funky Kong's barrel plane, causing it to crash land over Big Ape City. Hearing this occurring over a walkie-talkie, Donkey Kong, Diddy Kong and Cranky Kong travel to the Kremlings' factory in Big Ape City to rescue him. At the city, they learn that it was the Kremlings' automatic defense system who had sent the Hogwashes to shoot down Funky's plane, as he was thought to be a spy.

After Funky Kong is rescued, he begins working on repairing his damaged plane. Donkey Kong proceeds to the factory's defense system, and uses a TNT Barrel to destroy it so the Kongs can safely leave Big Ape City. Once the plane is repaired, the Kongs leave through a hole in the factory wall. Despite the defense system being destroyed, another swarm of flying pigs attempt to attack the plane. Funky Kong has the idea to pour the plane's entire supply of banana milkshake over the pigs. This causes their wings to become sticky, which forces them to glide back to the ground. The Kongs later use TNT Barrels to blow up the entire factory, escaping safely in their plane.