"Kremling" redirects here. For information about the enemy referred to as "Kremling" in Donkey Kong 64 and DK: King of Swing, see Kritter.
“Good thing these Kremlings are dumber than tree stumps.”
—Donkey Kong, Donkey Kong Country: Rumble in the Jungle

The Kremlings (also known as the Reptiles[1] and Crocodiles[2] in production literature for the Donkey Kong Country television series) are a race of crocodilians who appear in the Donkey Kong franchise. They first appear in Donkey Kong Country, where they steal Donkey Kong's prized banana hoard. Kremlings come in many different varieties and most of them have names that begin with the letter "K" (to the point where some names use real words beginning with "C" with the initial replaced with "K", such as Kalypso from "calpyso") Most Kremlings are part of the Kremling Krew (with K. Lumsy being a notable exception). Kremlings also made a few appearances in various sports titles in the Mario franchise; they are seen in the background of the DK Jungle Court in Mario Power Tennis and take on the role of goalies in Super Mario Strikers and Mario Strikers Charged, while in Mario Super Sluggers, they appear as team players.

In the Donkey Kong Country animated series, they are never referred to as "Kremlings"; instead, they are referred by various generic terms, such as "lizards" and "crocs".

The Kremlings originate from a canceled PC/Mac adventure game by Rare named Jonny Blastoff and the Kremling Armada.[3] The idea of Kremlings came from Kevin Bayliss,[4] while Steve Mayles adapted them into the Donkey Kong series. Most of the Kremling Kreeps in Donkey Kong Country 3: Dixie Kong's Double Trouble! were designed by Mark Stevenson.[5]

The Kremlings appear to originate from Crocodile Isle, an island close to Donkey Kong Island that disappeared from the map during the events of Donkey Kong Country 2: Diddy's Kong Quest. However, various ruins on Donkey Kong Island, such as the ones in Millstone Mayhem, depict Kremling visages, potentially meaning they have some history there as well. Kremlantis is a semi-submerged complex that also features several temples with Kremling visages.

In a similar manner to Koopas, Kremlings are depicted with multiple body shapes and statures, the most common being bipedal and humanoid. Some, however, such as Klaptrap, are quadrupedal, with a tail dragging behind them like real-life crocodilians. Bipedal Kremlings, such as Kritters, often have distinctly humanoid torsos with pectorals, navels and distinct shoulders; some even have external ears and hair among other humanoid traits. Many Kremlings are quite large, rivaling the size of Donkey Kong; still others are much larger, such as K. Lumsy and Kerozene. Kremlings appear in a wide variety of colors, such as blue, red, grey, purple, and orange; however, the most common colors seem to be the various shades of green. Although primarily based on reptiles such as crocodilians, some members of the species, particularly Kalypso, Kass, and to a lesser extent Kasplat and Klump, are depicted with more mammalian traits such as hair, as well as both breasts and nipples.

The Kremlings are known to enjoy eating bananas, and Klump is also seen eating oranges;[6][7] coincidentally, this trait is shared with real-life crocodiles, which have been shown in more recent research to occasionally eat fruit.

In the original Donkey Kong Country trilogy, the majority of Kremlings shared the same defeat voice clip as Krushas, with varying pitch levels. Kritters, Klaptraps, Klobbers, Kabooms, Kudgel, Krumples, Bazukas, and Kuff 'n' Klout do not follow this trend, however.

The Kremlings seem to have some level of government, as evidenced by King K. Rool as ruling monarch. While certain Kremlings such as Klump have been shown to care about their king,[8] comments made by Klubba about how Kremlings are "miserable" under K. Rool indicate that at least some Kremlings are not happy under his leadership. KAOS apparently acted as a replacement for K. Rool, though he was secretly controlling it. It is unknown how this process came about, or if the Kremlings were aware of K. Rool's plans and went along with it.

Kremlings are known to be rather apathetic regarding industrial safety; this can be seen with Kremkroc Industries, Inc., Krazy Kremland, Mekanos, K3, Frantic Factory, Ghost Island, and Chill 'n' Char Island, the factories making up the first of these being referred to by the Donkey Kong Country manual as "The Kremling's crowning industrial achievements."[9] From this, they tend to cause large amounts of pollution, as seen with Poison Pond, and show general neglect for the environment, as shown in their deforesting in Mekanos for the sole purpose of defeating the Kongs.[10] This contrasts with the Kongs, who are typically shown to be in harmony with nature.

In contrast to other intelligent animal species that are technologically primitive, the Kremlings possess relatively advanced resources, including robots, airships, submarines, warships, spaceships, and powerful weapons.

In Mario Super Sluggers Challenge Mode, the Kritters along with King K. Rool do not speak in animal noises unlike the Kongs, implying that the Kremlings are capable of speaking the human language.

The Kremlings seem to be a marauding and conquering race, as evidenced by their thievery, kidnapping, take-over of the Northern Kremisphere, and most commonly piracy, as shown in the events of Donkey Kong Country 2: Diddy's Kong Quest, by their frequent usage of pirate ships such as Gangplank Galleon, possession of treasure chests and valuables, and the Kremling Krew emblem. It is also possible that they showed similar sides in the unseen Kremean War, which they are assumed to have fought in.

Wrinkly Kong attempted to teach Kremlings at a school in Crocodile Isle; however, they displayed low intelligence, as evidenced by the incorrect sums on the blackboard, while another attempted to bring his sword to class.

Not all Kremlings are bad, as demonstrated by K. Lumsy, and to a lesser extent Krunch and Klubba.

“Kremlings, Kremlings everywhere! Kremlings are the tribe of reptilian rascals who have ripped off Donkey Kong's banana horde. They come in a variety of shapes, sizes and shades:”
—Donkey Kong Country instruction booklet, page 28
“The largest enemies you'll encounter are the Krocs that work for King K. Rool. The Krocs come in many shapes and sizes, but they all have one thing in common-their number-one directive is stop the Kongs. Some of the tough-skinned reptiles can be a bit much for Diddy, so be on your guard.”
—Donkey Kong Country GBA Player's Guide, page 14 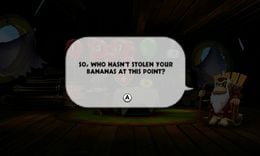