“I've found life too hectic at school with all those naughty Kremlings pestering me all the time!”
—Wrinkly Kong, Donkey Kong Country 3: Dixie Kong's Double Trouble!

Kong Kollege is a school run by Wrinkly Kong in Donkey Kong Country 2: Diddy's Kong Quest and Donkey Kong Land 2. In both games, there is a Kong Kollege in every world of Crocodile Isle, except the Lost World in the former game.

Sometime between the events of Donkey Kong Country 2 and 3, Wrinkly retired from Kong Kollege to reside in her Save Cave. Like its appearance in Donkey Kong Land 2, the only purpose of Wrinkly's Save Cave is to save the game progress, this time free of charge. For the Game Boy Advance remake, the location was changed to Wrinkly's Retreat. 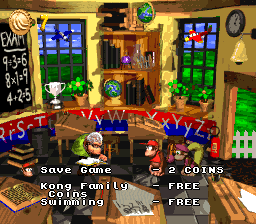 Although it is not shown in-game, the main purpose of the Kong Kollege is providing education to the Kremlings. For Diddy and Dixie, Kong Kollege has a similar role to Monkey Museum (or Cranky's Hut in the remake) because they can purchase advice and gameplay hints from Wrinkly. The information is different for each world. Although most of the advice is of gameplay hints, Wrinkly also offers advice on enemies and the world boss. She sometimes asks if Kaptain K. Rool has done his homework.

Kong Kollege being a private school, explains its tuition fees for gameplay advice.[1] Although after first hearing a piece of advice, the Kongs can hear it again for free.

The first and foremost option offered in every world is saving the game. For each location, saving the game for the first time is free of charge, but Wrinkly subsequently charges two Banana Coins (or one in the Japanese version) to do so again. In The Flying Krock, regardless of regional release, the first time the Kongs save their progress costs one Banana Coin.

In the Game Boy Advance version, Kong Kollege went through some minor changes. Since the remake allows the player to save their game from the newly-added world map menu (by pressing

), Wrinkly no longer offers to save Diddy and Dixie's progress. The Kongs can also request to do "homework", by filling up a Scrapbook with 40 photographs hidden throughout the game. In Krazy Kremland, Gloomy Gulch, and K. Rool's Keep, she also gives advice for each of the book's pages for 10 Banana Coins apiece; she gives advice on five pages for each world. Wrinkly gives them a Hero Coin for every page filled upon returning to Kong Kollege. The purchased advice can also be re-accessed from the world map menu (by pressing

In Donkey Kong Land 2, Kong Kollege only offered the essential option of saving the Kongs' progress. This means that they are no longer able to purchase advice. The fee for saving the game remains two Banana Coins, even in the Japanese version.

In the original version, a clear, cloudy sky over a grassy field is seen from the building. In the remake, the outside display varies between each world, based on its theme. This even affects the tint of Kong Kollege.

A few questions regarding the background details of Kong Kollege are asked in Swanky's Bonus Bonanza, including the globes (answer: 2), desks (answer: 5), and airplane models (answer: 2). In a Krazy Kremland challenge, he even asks who operates the Kong Kollege, which is Wrinkly.