Whenever the Kongs jump at a hook, both of them hang from it automatically. Diddy uses his tail to hang from a hook, and Dixie uses her ponytail. The Kongs can leave a hook by either jumping from it or by dropping directly below it. Hooks often appear in groups, which requires Diddy and Dixie to jump from several of them. The Kongs cannot automatically grab on to a hook while they are holding an object, and none of the Animal Friends have the ability to grab on to a hook. Hooks are often used to reach collectible items, such as a Banana Coin or a Red Balloon, or even to enter a Bonus Barrel. 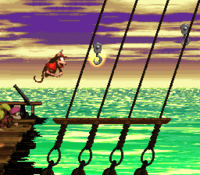 In Donkey Kong Country 2: Diddy's Kong Quest, hooks are first found in Gangplank Galley. In the level, the first hooks are used to collect the Video Game Hero Coin at the start. In the second Bonus Level, which is a "Find the Kremkoin!" challenge, Diddy and Dixie must jump from several hooks to reach the Kremkoin. At the end of Gangplank Galley and some other levels, there are hooks, which are the only way for the Kongs to land on an End of Level Target with enough impact to win one of its random prizes.

Diddy or Dixie can use team up to throw the other Kong on a hook as a way for both to hang from it automatically. Some of the hooks start off invisible, but Diddy and Dixie can make them visible by touching them. Some of their locations are hinted at by a trail of bananas. These hooks are most often used to reach a Bonus Barrel or a unique collectable within the level.

In the first half of Topsail Trouble, Diddy and Dixie can alternatively use hooks instead of Rattly's Superjump ability to progress further into the level.

Hooks are featured in the second boss level, Kleever's Kiln. During the first part of the battle, whenever Diddy or Dixie throw a kannonball at Kleever, a trail of hooks fall from the sky and remain in place above the lava pit. The Kongs must quickly jump from them to reach the other side of the arena while avoiding the fireballs thrown by Kleever. Once Diddy and Dixie reach the other side, the hooks drop into the lava. Later, during the second part of the battle, several more hooks appear above the pit of lava, with the uppermost ones being at the top. They are especially used for Diddy and Dixie to avoid Kleever's swinging attacks. Unlike before, these hooks do not fall back the lava after Kleever takes damage. The hooks only fall back into the lava once Kleever has been defeated.

In Donkey Kong Land 2, hooks are less common than in Donkey Kong Country 2: Diddy's Kong Quest, and the invisible ones do not return. Because only one Kong can be controlled at a time, Diddy and Dixie can no longer use team up to reach a hook.