Teaming up is an ability performed by the Kongs in Donkey Kong Country 2: Diddy's Kong Quest and Donkey Kong Country 3: Dixie Kong's Double Trouble!. It allows one of the Kongs to piggyback on their partner. While the move slows the Kongs' movement, team up allows them to reach higher locations, items, Bonus Barrels, and to more easily defeat stronger enemies. When a Kong is thrown upward to another position, including higher areas, the lead Kong automatically follows them there. Some enemies are not affected by team up, including Zingers, Buzzes, Bristles, Kuff 'n' Klout, and bosses, all of whom result in the player losing a Kong.

, the player can have the lead Kong carry their partner, and a second time to separate the Kongs again. They can press

to throw a Kong horizontally and also up on the

to do so vertically. In the Game Boy Advance versions, the

button is used to team up and separate the Kongs, and the

button is used to throw a Kong.

If a horizontally-tossed Kong hits the ground, they are shown in their defeated animation. To reunite with that Kong, the lead Kong must go back to their partner. If the thrown Kong hits a hazard or gets hit by an enemy after landing on the ground, the player loses that Kong. 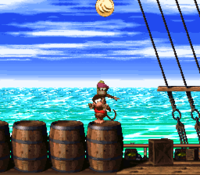 The Kongs use the team up move in Donkey Kong Country 2.

In Donkey Kong Country 2: Diddy Kong's Quest, the team up move is performed by Diddy Kong and Dixie Kong. This allows them to reach higher areas and to enter some Bonus Levels. While they are idle, the top Kong points in different directions: Dixie points backwards, while Diddy points forwards. Near the start of the first level, Pirate Panic, there are bananas arranged in the shape of the button for performing team up, and it instructs the player on how to use the ability.

In the Game Boy Advance version, the Kongs can defeat Krunchas with the team up ability by jumping on them.

In Donkey Kong Country 3: Dixie Kong's Double Trouble!, team up differs depending on which Kong is performing it.

If Dixie carries Kiddy Kong, her movement is significantly slowed due to Kiddy's weight. Dixie can throw Kiddy upwards, allowing him to slam onto a cracked part of the ground (usually a boardwalk) to access a hidden item or area, often a Bonus Barrel. Dixie cannot throw Kiddy far, and if she throws Kiddy forwards, he will roll and ricochet off walls, and Dixie can jump on him to perform a continuous roll.

If Kiddy carries Dixie, the move acts as it did in Donkey Kong Country 2: Diddy's Kong Quest. Kiddy can carry Dixie more easily due to her lighter weight and his greater strength. With team up, Kiddy can throw Dixie as a projectile at enemies and throw her up onto some otherwise unreachable areas.