Nids, also known as Springin' Spiders,[1] are large jumping spiders encountered in the hollow tree stages of Donkey Kong Country 3: Dixie Kong's Double Trouble! and in its Game Boy sequel Donkey Kong Land III. They act as bouncing platforms and have a plank of wood on them for Dixie and Kiddy to sit on. Like Arich, Nid's name is derived from "arachnid", a real world class in which spiders belong in.

Nids are categorized under the "Terrorfirma Tuff Guys" enemy class in Dixie Kong's Photo Album. Despite this classification, Nids do not injure the Kongs and are closer in behavior to Animal Friends. 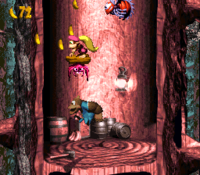 A Nid in Springin' Spiders

In Donkey Kong Country 3, Nids only appear in two levels, Barrel Shield Bust-Up and Springin' Spiders, both of which are in the world Kremwood Forest. Only one Nid appears in the former level, while Nids are the main feature of the latter. They either hop up and down in a fixed, vertical position or in an arc pattern.

Dixie and Kiddy are usually required to jump on a Nid because it to bounces them up to a higher part of the level. Nids sometimes assist the Kongs with reaching a Bonus Area. Nids can sometimes injure the Kongs indirectly by bouncing them into a Buzz. The Kongs can carry a Barrel on a Nid, but it usually breaks, even if they hold on to it.

There are two color variants of Nids, and both have slightly different behavior: the yellow Nids jump around nonstop while the pink Nids only jump when the Kongs sit on them.

Nids reappear in Donkey Kong Land III. Because it was released on the Game Boy, Nids do not have color variants, but their behavior is shared with the pink Nids from Donkey Kong Country 3: Dixie Kong's Double Trouble!. Nids appear under the "Baddies" group in the end credits.