Demolition Drain-Pipe is the seventeenth level of Donkey Kong Country 3: Dixie Kong's Double Trouble! and the second level of Mekanos. This level takes place inside of a pipeline, in which Dixie and Kiddy Kong utilize a toboggan for the first time. The vehicle moves rapidly, and the Kongs have little control over it. Because of this, they can easily crash into small gaps or hit the pipe vents scattered on the track. The toboggan can cling onto the railings suspended from the ceiling, where some bear coins and bananas are hidden at. Demolition Drain-Pipe only has two types of aerial enemies, Buzzes and Knik-Knaks, who can both be defeated with the toboggan. 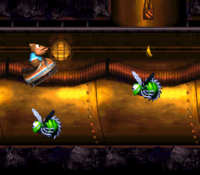 Kiddy jumps above a Buzz; the adjacent one has a banana above it, indicating the first hidden Bonus Barrel.

When the level begins, the Kongs face left toward a small gap. They can jump down it to land into an Auto-Fire Barrel, which blasts them into a toboggan. This vehicle takes the monkeys through the Buzz-infested pipeline. The toboggan will ride along the curvy pathway, leading them to a railing with the letter K. The vehicle will continue to move as they grab the item, making the Kongs jump over more Buzzes and other obstacles. Eventually, the heroes will meet the level's first Knik-Knak, who will help them reach a high railing with a DK Barrel if jumped on. However, the monkeys will have to let go of the railing quickly, as a Buzz lurks near the DK Barrel. Continuing through the level, the apes will jump over a few more obstacles, and also grab the letter O under a Buzz. Just a little bit farther from there, they will come up to the Star Barrel.

About halfway into the level, the heroes will ride into another DK Barrel and find themselves riding towards several pairs of Buzzes. They will have to jump between each group to progress. They will also find a few gaps in the area, which they should jump over at all costs. After jumping over two more small gaps, they will find a railing to grab onto with the letter N, along with some bananas. Crossing another set of gaps, they will find themselves dodging even more Buzzes and a few Knik-Knaks. As they near the end of the level, the heroes will find two Knik-Knaks in their way. They will have to jump between the enemies while watching out for a few gaps around the area. In this area, Kiddy and Dixie can also find the letter G on the above railing. Heading on, the monkeys will meet a few more Buzzes to jump over until they notice an Auto-Fire Barrel at the end of the track. If they jump into this barrel, they will be shot upwards next to a flagpole. Once they raise the flag on the pole, the level will end.