It has been requested that more images be uploaded for this article. Remove this notice only after the additional image(s) have been added. Specifics: Animated sprites of the green Banana and present from Donkey Kong Country 3: Dixie Kong's Double Trouble! and screenshots of the Green Banana(s) from the Donkey Kong Country television series

Green bananas are items in the Donkey Kong franchise. 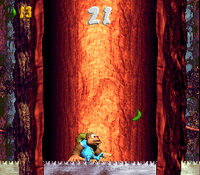 Green bananas first appear in Donkey Kong Country 3: Dixie Kong's Double Trouble!, where they are found in certain Bonus Levels. In these Bonus Levels, the object is for Dixie and Kiddy Kong to collect fifteen of them within a time-limit. If they succeed, they are awarded with a Bonus Coin. The catch here is that only one green banana appears at a time, and they appear in random spots, forcing the Kongs into scrambling to collect them. If the Kongs are not fast enough, any uncollected green bananas disappear.

Through the use of the "MERRY" code, which gives the Bonus Levels of the game a Christmas theme, the green bananas are replaced with presents, which serve the same purpose.

Green bananas[1] in the form of Banana Bunches reappear in the Game Boy Color version of Donkey Kong Country in certain levels, though they are simply a different color and serve the same function as a regular bunch, still being worth ten bananas when collected. They only appear to indicate a nearby DK Sticker Pack, requiring a stomp or Donkey Kong to perform a Hand Slap near them to unearth it. After the DK Sticker Pack is collected, the corresponding green bananas turn into normal bananas. A total of 18 green bananas appear in the entire game.

In the Donkey Kong Country animated series, green bananas of a different type appear in the episode "Watch the Skies". They are eaten by Diddy, who believes it would keep the aliens away. Later, when he sees General Klump sleepwalking and mistakes him for an alien, Diddy shoots a green banana out of its skin at him, waking him up.