The interior of Snide's H.Q.

When the Kongs give a Blueprint for Snide, he activates a series of contraptions to bring a chute down from the ceiling, which is where the Golden Bananas come down from.

By default, Snide's H.Q. only provided the Kongs with the option of reviewing the blueprints that they have recovered. The player can press

to exit from the location. If the Kongs recover all forty Blueprints, they can unlock another option to replay from a selection of Bonus Stages, by pressing 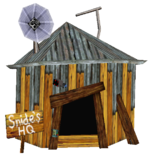 Snide's HQ in the kiosk demo (left) and retail (right).