Chunky Kong is one of the Kongs in the Donkey Kong franchise, and he first appears in Donkey Kong 64. Chunky is a big and strong member of the Kong Family but is somewhat meek. He is the cousin of Tiny Kong and Dixie Kong and the older brother of Kiddy Kong.

Chunky Kong is imprisoned inside a hanging cage in Frantic Factory in Donkey Kong 64.

In Donkey Kong 64, Chunky and the three other Kongs, Diddy Kong, Tiny, and Lanky, were captured by the Kremlings to distract Donkey Kong while they steal his banana hoard. Chunky is the fourth and final Kong to be rescued, although he can be rescued before Tiny Kong if Lanky is rescued first, then once Donkey Kong goes to Frantic Factory once it is possible to rescue him. Chunky is imprisoned in Frantic Factory's Storage Room, where he is locked in a cage that hangs from the ceiling. Lanky Kong can free Chunky by using OrangStand to walk up a pipe and Simian Slam a Kong Switch on top. This causes Chunky's cage to fall down and break, thus freeing him. This allows the player to select Chunky from a Tag Barrel, and to collect green bananas, Banana Bunch Coins, and green blueprints.

Chunky acts as the game's comedic relief. This is first shown in the DK Rap opening, where he briefly wears a 1970s-era disco outfit, but then quickly changes into his regular outfit after realizing that the other Kongs are in their normal outfit. Another instance is in the Tag Barrel, where he acts the opposite of the other Kongs, who want to be selected: if the player highlights Chunky, he gets scared of being chosen by the player and points to Tiny. If the player highlights the next Kong, Chunky is shown expressing a sigh of relief. Additionally, after Chunky falls to the ground from high up (which makes him lose a Melon of his health), he gets up with a shrunk torso and limbs. Chunky proceeds to inflate those body parts back to normal size. 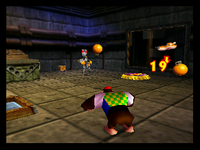 Chunky throws an orange at a Robokremling in Frantic Factory

Chunky has a few unique abilities that he can learn from Cranky Kong at his lab. The first move that Chunky learns is Primate Punch, which allows him to activate wall switches depicting his face, and as an attack to defeat stronger enemies such as Robokremlings. The second move that he learns is Hunky Chunky, which makes him grow gigantic. The third and last move is Gorilla Gone, which allows Chunky to become invisible (except his clothes), see invisible objects, and pass by searchlights undetected.

Chunky Kong is the strongest of the Kongs, and has the unique ability to lift and throw boulders. Contrarily, Chunky moves the slowest of the Kongs and also has the lowest jump of them. This is mentioned during his verse in the DK Rap along with his strength.

In Fungi Forest, Chunky is selected by the boss door of Troff 'N' Scoff to fight the level boss, which is a rematch against Dogadon. The level also has a Mine Cart Ride that Chunky must complete. During the King Kut Out battle, Chunky can be optionally selected from the Tag Barrel, along with the other Kongs. He is the third Kong to participate by default if the previous two Kongs (Lanky and Tiny) are blasted out the stage.

During the final boss battle against King K. Rool, Chunky is the fifth and final Kong to go against K. Rool. When the fifth round starts, K. Rool turns invisible and Chunky must stand on a Chunky Pad to activate his Gorilla Gone ability, which turn Chunky invisible but makes K. Rool visible. This also causes a Chunky Barrel to float above the center of the stage. Chunky must jump inside it to activate his Hunky Chunky ability, so that he can perform a Primate Punch as K. Rool charges for him. Chunky eventually knocks out K. Rool and wins the boss fight. In the credits, Chunky is seen playing with Tiny Kong, but accidentally throws her up onto a cliff.

Chunky Kong is playable in the Multiplayer mode. Aside from Chunky's regular outfit, there are three different color options for Chunky's vest. This includes a green vest with a light and dark purple pattern, a purple with a blue and light blue pattern, and a red with a yellow and red pattern.

"Donkey Kong in When the Banana Splits"[edit]

In the comic Donkey Kong in When the Banana Splits, Chunky helps the other Kongs track down King K. Rool when he steals the Golden Bananas. Chunky is the first one to attack the Kremlings, leading to a large battle between them and all of the Kongs. Chunky and his companions eventually emerge victorious, and return home with the Golden Bananas. In the comic, he is incorrectly drawn with teeth for an unknown reason.

In Donkey Kong Country 3 for the Game Boy Advance, Chunky makes a cameo in the "Protect" challenge of the Funky's Rentals minigame. He is one of the Kongs who appear in the water and must be protected from being taken away by speedboats piloted by Kremlings.

Chunky Kong appears as a sticker in Super Smash Bros. Brawl. It can only be used by Donkey Kong and Diddy Kong, and it boosts the strength of throwing attacks by 31.

Chunky later appears as a spirit in Super Smash Bros. Ultimate, which reuses his artwork from Donkey Kong 64.

Chunky has the typical ape attributes like the other Kongs, and he has a similar build to his younger brother Kiddy Kong, having a big torso with large and long burly arms, showing his strength. By comparison, his legs and feet are quite small. Chunky's head is also fairly big, partly due to his large mouth that is even bigger than Kiddy's. Like Kiddy, Chunky has brown eyes, though his are a darker shade and are also unconnected with each other. His ears are also very small. Chunky is the biggest member of the Kong family, being taller than Candy Kong, and is more than twice as heavy as Donkey Kong, weighing 2000 pounds (907 kg) at his normal size, compared to Donkey Kong, who weighs 800 pounds (363 kg). Additionally, Chunky is described as being quite young, in spite of his huge size and deep voice.

Chunky's clothing consists of a white t-shirt with a vest over it that is blue on the front and has two yellow and orange buttons. The backside is colored yellow and green in a checkerboard pattern. He wears a red cap similarly to Diddy Kong's that is turned backwards, but his does not have the Nintendo logo on it. Chunky also wears a black belt with a golden belt buckle around his waist.

Chunky is portrayed as a strong character, but also sweet and gentle. He prefers not to fight unless he has to in order to help or protect those he cares about. He is normally cowardly, as if the player highlights him in the Tag Barrel, he will shake his head and point at Tiny to try and get an excuse not to go. He also was afraid of Dogadon, and dropped to his knees to beg him not to hurt him. He is also shown to be somewhat clumsy as he was seen causing accidents and messing up certain parts in the DK Rap.

Finally, he's here for you
It's the last member of the DK crew
This Kong's so strong, it isn't funny
Can make a Kremling cry out for mummy
Can pick up a boulder with relative ease
Makes crushing rocks seem such a breeze
He may move slow, he can't jump high
But this Kong's one hell of a guy!

Although Chunky is young in years, he is nevertheless almost as strong as Donkey. The well-mannered giant gorilla is, in the truest sense of the word, a great guy, and sticks to Lanky, his uncle once-removed, like a leach. Chunky is crazy about toys and sees the Kremlings also as giant play figures whom one can give a good beating.

The giant ape, who is always in a good mood, feels most comfortable in company, especially when he can take part in a tournament of the best wrestlers.

Everyone wonders why Chunky, who is always pretty clumsy, always wins the tournaments. Lanky says it's because he beams at his opponents and throws them off their guard in this way.

Chunky has not been spared from being taken prisoner, either, and the solitude is especially difficult for him to take.

Hopefully, his friends will be at hand soon...