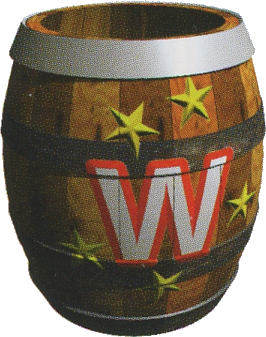 Artwork of a Warp Barrel

Warp Barrels appear in Donkey Kong Country 2: Diddy's Kong Quest with the appearance of a Barrel Kannon in the Super NES version. When entered, Diddy and Dixie are sent into a warp room. The warp room usually only takes up a single screen, and in the center is a group of bananas in the shape of a large exclamation mark. The Kongs can exit out of the warp room to their right. Only the levels in Gangplank Galleon and Crocodile Cauldron have Warp Barrels in them.

In Donkey Kong Land 2, Warp Barrels have the same sprite as Bonus Barrels. Unlike Donkey Kong Country 2: Diddy's Kong Quest, the warp rooms do not have bananas shaped like an exclamation mark. Warp Barrels only appear in levels from the first world, Gangplank Galleon.

In Donkey Kong Country 3: Dixie Kong's Double Trouble!, Warp Barrels have a "W" decoration on them. Unlike the previous game, Dixie and Kiddy are not sent into a warp room, so by entering the Warp Barrel, the Kongs are instantly warped in front of the Level Flag. Lake Orangatanga and Kremwood Forest are the only worlds whose levels have Warp Barrels.

The Warp Barrel area in the Game Boy Advance remake

In the Game Boy Advance remake of Donkey Kong Country, Warp Barrels replace the Blast Barrels from the Super NES and Game Boy Color versions that send Donkey and Diddy Kong near the end of the level. They are much more common than the original barrels, with warps appearing once per level. Warp Barrels were redesigned with the "W" on a red explosive effect; this design also appears in the Game Boy Advance remake of Donkey Kong Country 2. By entering a Warp Barrel, the Kongs are taken to a space with its own music track that does not exist in other versions of the game - an ice walkway in a black void, with pictures of some levels, each showing a different environment, hovering across in the background. On the icy path there are bananas that spell out "WARP", and the end of the scene puts the Kongs near the end of the level. In all versions of the game, Stop & Go Station has an off-screen warp point that functions as one of these barrels, which is found by walking into the entrance to the left at the very start.