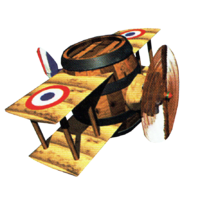 If Diddy or Dixie Kong visit Funky's Flights II, Funky allows them to use the Biplane Barrel to travel to another world via the Crocodile Isle map, as long as they have already visited it. The only exception is the Lost World, which can only be accessed through Klubba's Kiosk. At first, for each world, usage of the Biplane Barrel costs two Banana Bunch Coins, but all consecutive uses within that world is free.

In the Game Boy Advance version, unlike the original version, the Kongs no longer visit Funky's Flights II to use the Gyrocopter. This is because after completing Aerial Loop, the player can select the Gyrocopter from the world map's

menu whenever they decide to.

In DK: Jungle Climber, Funky owns a plane that largely resembles the Biplane Barrel, only referred to as Funky's airplane. Donkey and Diddy Kong use it travel to each world's smaller island, provided they have enough oil barrels.