“Look out below! Klinger climbs around in the rigging, ready to slide down on anyone below him.”
—Donkey Kong Country 2: Diddy's Kong Quest SNES manual, page 28

Klingers[1] are Kremlings with the capability of climbing ropes and chains. Their main appearances are in both Donkey Kong Country 2: Diddy's Kong Quest and Donkey Kong Land 2. Klingers do not have an instinctive climbing ability, but were instead trained specifically to achieve this ability.[2]

Klingers are orange-skinned, yellow-bellied Kremlings with a long, scaly tail. They wear a green, white-spotted head bandana and a matching loincloth around the waist. Klingers (aside from Klobbers) are among the few Kremlings to have ears, in which they have a hoop earring for each one. Klingers have clawed toes but their fingers do not. Their artwork also depicts them having a large dagger in their mouth, though it does not appear in-game. 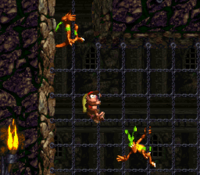 In Donkey Kong Country 2: Diddy's Kong Quest, Klingers first appear in Mainbrace Mayhem. They repeatedly climb up a rope or another object, such as a chain, before sliding down. They usually make it harder for Diddy and Dixie to go across the ropes, which is mostly noticeable in Chain Link Chamber where Klingers appear as the main enemy. In Krockhead Klamber, the Klingers are climbing on cattails.

Diddy and Dixie can defeat Klingers by throwing objects at them, including barrels, kannonballs, and crates, or even by using their team up ability to throw the second Kong at them. This causes the affected Klingers to fall off the rope. Like most other enemies, if Diddy or Dixie touch a Klinger, the player loses that Kong.

In the ending credits, Klingers are classified under "Kremling Kuthroats" along with the other Kremlings.

In Donkey Kong Land 2, Klingers also make their level debut in the game's Mainbrace Mayhem counterpart. Diddy or Dixie can now defeat a Klinger if they are on intersecting ropes by moving horizontally into the Klinger if it is right next to them.

In the end credits, Klingers, along with the other enemies and bosses, are instead classified as "The Baddies."

In Donkey Konga 2, Klinger's artwork sometimes displays on screen in Freestyle Zone in correspondence to the player hitting the DK Bongos.