“Rambi always likes to go full speed ahead. If you press and hold the

Button, Rambi will take off and run over everything in his path. Just make sure that you keep your eyes open for pits and cliffs. Rambi is a powerful animal and can break his way into most secret doors.”
—Donkey Kong Country instruction booklet, page 24

Rambi is a recurring Animal Friend throughout the Donkey Kong franchise, and he first appears in Donkey Kong Country. Rambi is a strong ally of the Kongs, and has the ability to charge into enemies, use his horn for an attack, and to break open fragile walls leading into a Bonus Level. Rambi only appears in a few select levels in every game that he appears in, or a single location.

“Keep your eyes peeled for Rambi the rhino! He can crash into almost any hidden room.”
—Cranky Kong 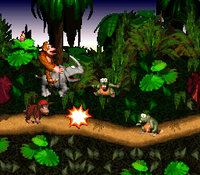 Rambi as he appears in Donkey Kong Country.

Rambi next to an "F" letter in the Game Boy Color version of Donkey Kong Country.

In Donkey Kong Country, Rambi is the first Animal Friend encountered, and he appears in the first level, Jungle Hijinxs, and later appears in Oil Drum Alley and Manic Mincers.

To ride Rambi, Donkey Kong and Diddy Kong must free him from his animal crate. Rambi can use his horn to break open fragile walls, much like barrels. He can defeat most enemies by moving into them, including Zingers. Like other Animal Friends, if Rambi gets hit by a level hazard (such as Mincers or flaming oil drums), he runs away.

Rambi is featured on some of the animal tokens. When Donkey Kong and Diddy obtain three Rambi Tokens, the player is redirected to the "Rambi Bonus!"; this area is set in a snowy location, where the player controls Rambi individually and must have him collect mini Rambi Tokens.

Rambi is one of two Animal Friends to reappear in Donkey Kong Land, the other being Expresso the Ostrich. Rambi retains his actions and role from Donkey Kong Country, and, like the previous game, he also appears in the first level, Jungle Jaunt. He appears in three other levels: Tricky Temple, Pot Hole Panic, and Mountain Mayhem. 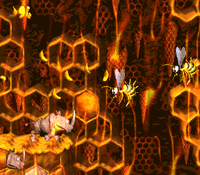 Like his two previous appearances, Rambi appears as a mount in the first level, Pirate Panic, where his animal crate appears after the Star Barrel. From there, the Kongs can optionally ride Rambi until reaching his No Animal Sign. Rambi makes his second level appearance in Red-Hot Ride and his third in Barrel Bayou in the same capacity, though his crate and sign are near the start and Star Barrel, respectively.

Rambi Rumble is Rambi's signature level. During the level's second half, the Kongs must transform into Rambi, who is then chased by King Zing for the second part of that half. The theme that plays during the chase in the original version is even called "Run, Rambi! Run!". Rambi can also be used in the first half Castle Crush and is the first Animal Friend used in Animal Antics (both via Animal Barrel).

At Swanky's Bonus Bonanza in Krem Quay, one of the questions that Swanky Kong asks is Rambi's name, with the incorrect answers being "Bambam" and "Rambus".

Rambi (once named Rambi the Rhino) makes a fourth game appearance in Donkey Kong Land 2. He retains his supercharge abilty from Donkey Kong Country 2: Diddy's Kong Quest; consequently Rambi cannot break open walls leading to a Bonus Level, as every one is accessed from Bonus Barrels. Like other Animal Friends, the Kongs can only transform into Rambi from an Animal Barrel because animal crates do not reappear. Rambi was changed to be mostly invulnerable except if he falls down an abyss. 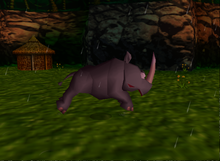 In Donkey Kong 64, an animal crate of Rambi appears in Jungle Japes, and it can only be entered by Donkey Kong. By entering it, Donkey Kong transforms into Rambi, which is required for him to obtain a Golden Banana. Rambi has the ability to move around fast and to easily defeat enemies just by moving into them. Rambi is able to destroy the nearby wooden huts and a stone barrier with his face on it. If Rambi goes out of bounds, he transforms back into Donkey Kong.

The player can unlock both the Rambi Arena and Enguarde Arena after the Kongs have taken photographs of six Banana Fairies. The player also controls Rambi in one of Donkey Kong's Hideout Helm challenges, where Rambi must defeat 18 Kritters while avoiding the electrical pylons.

Rambi is mentioned and criticized by Cranky Kong in the instruction manual: "I just hope they've included poor old Winky and Expresso this time instead of that bone-brained rhino that always seems to get in the games."

Rambi reappears in Donkey Kong Country Returns and Donkey Kong Country Returns 3D as one of the two returning Animal Friends (the other one is Squawks the Parrot). Rambi is the only Animal Friend that Donkey Kong and Diddy Kong can ride; to do so, Donkey Kong must first free Rambi by Ground Pounding or Rolling into his large animal crate. Rambi has the ability to run over spikes and destroy stone objects and blocks showing an emblem of his face. Rambi can instantly defeat most enemies just by running into them. Rambi's only weakness is fire, including the flaming enemies, Flaming Tiki Buzzes and Fireballs. The player loses Rambi if he gets in contact with fire but instead of dying instantly, he will instead walk away aimlessly, giving the Kongs the chance to get him back. Due to Rambi's weight, Diddy can only hover for one second when using his Barrel Jet.

Like Donkey Kong Land 2, Rambi first appears in the third level, Tree Top Bop. He appears in a total of four levels, the other three being: Temple Topple, Precarious Plateau, and Smokey Peak.

Rambi reappears in Donkey Kong Country: Tropical Freeze and its Nintendo Switch port, where he mostly retains the same role as in Donkey Kong Country Returns. He is still vulnerable to fire and flaming enemies, such as Blue Hootz. In addition, Dixie Kong and Cranky Kong can make use of their respective ability while riding Rambi: Helicopter Spin and Cane Bounce. Dixie's Helicopter Spin is less effective while she is riding Rambi. In the Nintendo Switch version, Funky Kong is able to perform a Double Jump while riding Rambi: like Cranky's Cane Bounce, the Double Jump is not affected by Rambi's weight.

Like Donkey Kong Country, Rambi only appears in three levels: Mountain Mania, Frantic Fields, and Meltdown Mayhem. Unlike in the previous game, Rambi Crates cannot be broken by rolling into them.

In the Club Nintendo comic Donkey Kong in: Banana Day 24, Donkey Kong is briefly seen riding Rambi to an airport.

Rambi makes a cameo appearance in Picross NP Vol.8 as one of the images that must be cleared.

Rambi in the "Jam Session" mode of Donkey Konga (bottom-left)

Rambi reappears in Donkey Konga as a background character in two modes. In "Challenge", he appears at the bottom-left corner of the screen, next to the song number counter. In "Jam Session", he and the other background characters, including King K. Rool, Cranky Kong, Diddy Kong, Ellie and the Banana Birds, appear on the bottom screen while the player performs a "jam session". In this game, Rambi was drastically redesigned, where he was based more on a white rhinoceros.

The front of the Rambi Rider, a kart from Mario Kart DS, is designed like Rambi's head. The kart returns in Mario Kart Tour, in the Jungle Tour.

In Donkey Kong Barrel Blast Rambi appears in the course Dynamite Run, where the Kongs and Kremlings can ride Rambi by freeing him from his animal crate. Rambi increases the players' speed and has the ability to charge through barrels and boulders.

In Super Smash Bros. Brawl, Rambi makes a cameo appearance as a trophy, obtainable when it appears at random in one of the game's single-player modes. There is also a sticker of Rambi which increases arm-based attacks by 13 points when used by any fighter in The Subspace Emissary.

In Super Smash Bros. for Nintendo 3DS, Rambi once again appears as a collectable trophy.

Rambi appears in Super Smash Bros. Ultimate as an Ace-class Attack-type primary spirit with one support slot. The spirit slightly increases movement speed in battle. In World of Light, the spirit is located in the northern part of Forest Hill, a sub-world of the Light Realm. The spirit's puppet fighter is a white Donkey Kong who can deal damage by dashing into the player, and is fought on the omega form of the Kongo Falls stage.

In the Donkey Kong Adventure story of Mario + Rabbids Kingdom Battle, one of Rabbid Peach's Blaster weapons, the Horn-Nosed Needler, is based on Rambi's appearance. The weapon's description states that it is officially licensed Rambi merchandise.