It has been requested that more images be uploaded for this article. Remove this notice only after the additional image(s) have been added. Specifics: K-O-N-G Letter locations.

Manic Mincers is the thirtieth level in Donkey Kong Country and the second level of Chimp Caverns.

Manic Mincers is a cave level that feature several Mincers as the main obstacle, as its name suggests. Each Mincer moves in a different pattern, either horizontal, vertical, or clockwise. Some of them do not move at all. Early in the level, Donkey Kong and Diddy Kong can release Rambi the Rhino from his animal crate to ride him for the rest of the level. Rambi cannot defeat the Mincers, because if he hits one, he runs away. Rambi can help the Kongs access a few Bonus Levels. A few Krushas are in the level, and Gnawties are the most common enemy of the level. In the original Super Nintendo version, the lighting subtly changes; for instance, it gets slightly darker just before the Rambi Crate but lighter after the letter O. 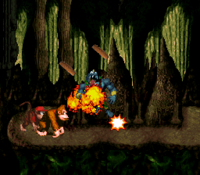 Donkey Kong defeats a Krusha with a TNT Drum

A Gnawty and a small pit containing a Mincer can be found at the level's entrance. Two more Mincers are ahead, moving in vertical paths. The level's first DK Barrel wobbles immediately before them, and a Gnawty walks between them. A small wall with the letter K next to it is located near the second Mincer in this area, which has a small pit in it. A Mincer floats in and out of the abyss. An animal crate containing Rambi the Rhino sits near here by a pit consisting of two moving Mincers that are always parallel to each other. The primates can find a few Gnawties marching down the area after the abyss, being followed by two higher pieces of land with Mincers on the edge of them. Another Gnawty can be found before a pair of Mincers on the highest piece of land. In this Mincer group, one stationary Mincer sits on the ground with the letter O over it, while the other Mincer moves up and down above it. Another pair of Mincers are ahead that move in the same pattern, except this time the top Mincer is stationary while the other moves. Four more stationary Mincers grind against the ground after this, and a fifth Mincer travels between the last two of the obstacles. The level's Continue Barrel can be found shortly after the last Mincer in this area.

A TNT Drum can be found immediately after the barrel, along with two Mincers; one of these Mincers are stationary, while the other orbits around it at a quick pace. The heroes can find a DK Barrel on a raised piece of land after they pass a Krusha. Two additional Mincers moving in a circular path are ahead above an abyss that is followed by a barrel and an alcove containing a Krusha. Three more Mincers can be found ahead, each traveling in a circular patten around a Banana Bunch. The primates can find a wide abyss ahead of here with a Mincer grinding in the center of it. A small platform hovers across the whole pit to help the heroes cross it. A TNT Drum and another Krusha can be found on the opposite side of this pit, followed by a second wide abyss with another moving platform in it. As it pulls them over the abyss, they are taken past two Mincers and the letter N.

A DK Barrel shakes on the other side of the pit, and it can be broken to free a lost partner. A Mincer orbits a small platform floating in an abyss nearby, which is followed by a lone piece of land with a pair of Krushas on it. Another abyss after this area contains a small platform used to cross it. Two sharp Mincers surround it. Once the heroes cross the pit, they come towards a few Gnawties and a sign indicating that the level is almost over on a straight pathway. A stationary Mincer with another Mincer speeding around it can be found nearby, being followed by a group of high ledges. Gnawties march along a pathway that leads farther into the level in front of the ledges. Using a small cave (leading to a Bonus Level) around this area, the primates can access the top of the high pieces of land, where a DK Barrel and a TNT Barrel wait. The primates' path is soon blocked by a wall created by two Mincers stacked on top of each other, which can be jumped over with the use of a tire sticking out of the ground next to them. An exit sign stands on the other side of the obstacles with a tunnel ahead of them that leads out of the level.