Mine Cart Madness is the twenty-seventh level of Donkey Kong Country and the fifth level of Kremkroc Industries, Inc. In the Game Boy Advance remake, this level switched positions with Blackout Basement, making it the sixth and last level and the twenty-eighth level overall.

Similar to Mine Cart Carnage, the level involves Donkey Kong and Diddy Kong riding in a Mine Cart. A difference is that the Kongs jump out from a Mine Cart rather than jump with it. The Kongs often have to jump over a short abyss and land into the next Mine Cart to continue. Zingers and Neckys are the main enemies of Mine Cart Madness. A few Krashes are also in the level except they sit in a non-moving Mine Cart at the start of a track segment, and the Kongs can jump on the Krash to take control of their Mine Cart. The Kongs also encounter three Gnawties at the start of the level and a fourth one at the end.

At the start of the level, the Kongs must pass or defeat three Gnawties and pass a DK Barrel along a set of scaffolds, then hop into a Mine Cart to advance throughout the level. They are then pulled past a Necky, then another. Next, the track becomes a dead end and the Kongs must defeat or pass another Necky and hop into the second Mine Cart of the level. Donkey and Diddy Kong must then nab the letter K between two Neckys and continue along throughout the level. They can either jump onto the Mine Cart on the shortcut by climbing up a rope, which takes them past the Neckys below, or they can take the hard way with Neckys as obstacles. On the secret path, they can collect many bananas and/or enter the Bonus Barrel above them, while on the lower path, they ride over a small ramp that sends them over some of an abyss. After riding through either of the pathways, Donkey and Diddy must hop over a Zinger to go into the next Mine Cart of the level. After defeating or passing a Necky, they encounter two more Neckys that they can bounce on to collect the letter O. The Kongs must then jump into another Mine Cart, where they temporarily go upwards and must only avoid a single Zinger to move onto the next Mine Cart. After this, they must hop into two more Mine Carts on two short tracks, until they reach a Mine Cart on a longer track, which leads the duo to the Continue Barrel. 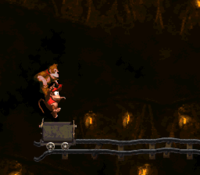 The Kongs hop into a Mine Cart

Halfway throughout the level, the Kongs must fall downwards off of the edge of a track to land in a lower area with a DK Barrel and two Neckes that they must jump over or defeat. Then, they encounter a line full of Mine Carts on short tracks, as well as the letter N after riding in the two Mine Carts on short tracks. They must then hop into another Mine Cart to continue throughout the Mine Cart level. The primates can find a tire high up in the air in which they can jump onto to hop into the second Bonus Barrel. They may ignore it and then avoid two Zingers until they reach the deadline of the track. The Kongs must then jump onto a tire on a nearby platform, which helps them jump into another Mine Cart leading between two Zingers. Afterwards, the Kongs must hop onto another platform, avoid a Zinger, and, optionally, collect the letter G with a tire on the platform.