Poison Pond is the fourth and last underwater level. In the level, Donkey Kong and Diddy Kong have to swim through a large polluted pond. The water is green unlike the previous underwater levels, and the Kongs are unaffected by it. Many aquatic enemies appear in the level, including Bitesizes, Chomps Jrs., and Squidges. Mincers are the main hazards and obstacles of the level instead of Croctopuses, and they either move horizontally, vertically, or in a clockwise direction. Mincers often move in and out of the small gaps within the reefs.

Like Coral Capers, there are two animal crates with Enguarde; the first is at the very start, where the Kongs must pass through the reefs at the bottom left to enter an area with the first Enguarde Box. The other is after the Continue Barrel, directly right of a Chomps Jr. and a Bitesize. Enguarde can help the Kongs by defeating the enemies along the way, although he cannot defeat Mincers.

There are a few hidden areas in the level. In some areas a Chomps Jr. guards a thin area with a Banana Bunch. After the letter N, the Kongs and Enguarde can continue left into an area with three Mincers and further left by passing through some coral reefs to go into a hidden area with a group of bananas shaping a left arrow and the Expresso Token; the hidden area also serves as a shortcut. Like the other underwater levels, Poison Pond has no Bonus Levels. 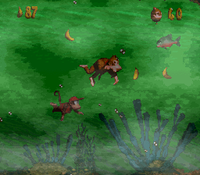 The Kongs progress through the early part of the level

The level begins in a wide area full of Bitesizes with an alcove above it that contains the letter K. As the area starts to become narrower, the heroes approach the level's first DK Barrel, which is followed by a trail of bananas leading through a passage to the north. An optional path to the right of the barrel leads to a Chomps Jr., a Banana Bunch, and then a dead end. If the primates follow the banana trail, they can find a wider area to their right and a thinner area to the left, where two Chomps Jrs. and another Banana Bunch can be found. If they travel to the right, they come past a Mincer and a few underwater enemies, such as a Squidge. After passing a pair of Mincers that both move in a vertical path across the whole area, the Kongs can find a small alcove containing a Banana Bunch that is guarded by a fourth Mincer.

A passage to the north of here leads to an open area with two Mincers grinding across it. A thin channel is to the left of the top of this area that leads the primates into a wider passage containing more Squidges and a DK Barrel. Two Mincers parallel to each other are ahead, and another Mincer moves in a horizontal path above them. Once the Kongs pass these foes, they come up to a few Bitesizes and a group of bananas that are followed by two more Mincers moving in horizontal paths. The Kongs can maneuver around the obstacles to find many Squidges and reach a passage facing north, where the letter O is located. At the top of the passage, they can find a narrow channel with a Mincer in it to the east. The level's Continue Barrel is immediately after the hazard.

From the Continue Barrel, the heroes can discover an arrow that is formed by a multitude of bananas. A few alcoves that Mincers move in and out of are placed along the sides of the passage ahead of here. After the primates pass them, they approach a large area with a pathway to the north and a pathway to the east, where an animal crate containing Enguarde is located. A small pathway below the crate leads to a few Mincers. If the duo travels through the passage to the north, they encounter another Mincer in a tight space. They can use an alcove in the area to avoid the Mincer as it grinds across the passage. A large, open area is ahead with a DK Barrel in the bottom corner of it and a channel running through the north of it. Another large area containing three Mincers that move in a circular patten together area on the other side of the channel. Another channel to the left of here leads into a thin area with a Mincer moving through it. The group sits in the final part of the level

The Kongs must take refuge in the alcoves around the passage to avoid it. Three more Mincers circle a wider area nearby, which has a passage at the bottom of it that leads to another open area with two stationary Mincers at the bottom of it. Another Mincer moves in a horizontal path above them. Two more open areas are ahead of here, each containing a single Mincer that is orbited by another. A DK Barrel is also in the first of the areas. Once these parts of the levels are passed, the primates can find a long passage facing north with two Mincers traveling throughout them. An alcove in the center of this passage can be used to help the two friends dodge the obstacles and safely reach a channel that leads into a long and wide area containing numerous Bitesizes, a sign indicating that the level is almost over, and the letter G. After swimming between two Zingers farther into the level, the Kongs can journey to the level's exit, located immediately after an exit sign.