“It's just like the old days, reusing the boss, changing it's[sic] color, and pretending it is completely new.”
—Cranky Kong, Donkey Kong Country 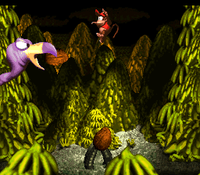 Diddy in a boss battle against Master Necky Snr.

In the Game Boy Advance remake, Necky's Revenge involves Master Necky collaborating with Master Necky Snr. in a battle against the Kongs. Both of them spit out a single nut, one after the other. When Donkey Kong and Diddy Kong jump on either boss five times, that boss is defeated. Afterward, the other boss starts shooting four nuts in succession. When the Kongs jump on both bosses five times, they win the boss fight.