Artwork of the Jumbo Barrel

The Jumbo Barrel,[1] also known as the Funky Barrel[2][3] and the barrel plane[4] is a barrel in the shape of an airplane. It is owned by Funky Kong, and first appears in Donkey Kong Country.

In Donkey Kong Country, if Donkey and Diddy Kong pay a visit to one of the six Funky's Flights on Donkey Kong Island, Funky will let them ride in his Jumbo Barrel to any area of the island that they've already visited, free of charge. The Jumbo Barrel cannot travel to areas that the Kongs have not accessed yet, as a means of preventing level-skipping. The Jumbo Barrel is the safer alternative for traveling between worlds rather than defeating a world's boss again.

In the Game Boy Advance port, if the Kongs have visited the Funky's Fishing location at least once, the player can use the Jumbo Barrel at any time by selecting the "Call Funky" option from the world map. The Jumbo Barrel can still be used from within Funky's location. The theme "Funky's Fugue" was also changed, during when the players access his location and use his Jumbo Barrel alike. 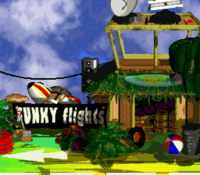 In Donkey Kong Country 2: Diddy's Kong Quest, the Jumbo Barrel is replaced with the Biplane Barrel. Although it serves the same purpose as the Jumbo Barrel, Funky will charge two Banana Coins for the first ride at each Funky's Flights II location, but each ride afterwards is free. The Jumbo Barrel instead makes a cameo appearance and is seen behind the Funky Flights sign, seemingly having been disposed of. It also reappears in the Game Boy Advance version, being barely visible behind the screen that records the player's best time from the Funky's Flights II minigame. 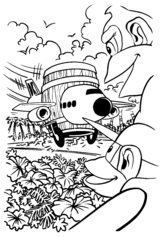 Illustration of the barrel plane, from Donkey Kong Country: Rumble in the Jungle

In the 1995 novel Donkey Kong Country: Rumble in the Jungle, Diddy Kong is given a ride in Funky Kong's barrel plane, which is described as a "custom-built flying machine [resembling] an oversized barrel that had sprouted wings and a tail". In this appearance, Funky Kong uses the barrel plane for his business of transporting people from place to place on Donkey Kong Island. Diddy Kong is initially afraid of joining Funky for a ride, due to Funky's enjoyment in performing loops and dangerous tricks in the air. While in the plane, Diddy Kong spots smoke rising from Big Ape City, which was thought to have been completely abandoned. After Funky Kong returns Diddy Kong to the ground, a beep from the cockpit alerts Funky Kong that someone else needs a flight, so he hastily leaves, accidentally leaving behind his walkie talkie. Contacting him, Donkey Kong hears that Funky Kong had been attacked by some flying pigs while flying over Big Ape City. Donkey, Diddy and Cranky Kong decide to travel there to rescue him.

After reaching the city, the Kongs hear that Funky Kong has been kept in a cell in the Kremlings' factory, as they thought he was a spy sent in a plane. Donkey Kong find him and breaks him out, and Funky Kong leads them to a cargo room where his damaged plane is being kept. After inspecting the barrel plane, Funky says that he requires a new water pump, which Diddy Kong retrieves from the factory's store room. After Funky repairs the barrel plane, they escape through a hole in the factory wall, although they are swarmed by more flying pigs. Funky Kong asks the Kongs to pour the barrel plane's entire supply of banana shakes over the pigs, causing their wings to become sticky. Later, Funky Kong skillfully maneuvers the plane in order to dodge the rockets launched from King K. Rool's zeppelin. Donkey Kong and Diddy Kong them decide to jump from the plane, in order to land on the zeppelin. They then proceed to plant it with time-delayed TNT Barrels, and they safely escape from Big Ape City together in the plane, returning to their treehouse. 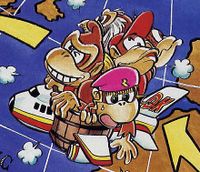 The Kongs in the cramped Barrel, as seen in Banana Day 24

The Kongs also use the Jumbo Barrel for their journey from their jungle to the United States of America in the Club Nintendo comic Donkey Kong in: Banana Day 24. Donkey, Diddy, Dixie, Kiddy, and Cranky Kong all use it at the same time, so the Barrel is cramped and the Kongs are not enjoying their ride; only Donkey Kong stays calm and confident. 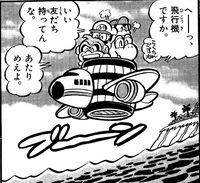 In issue 14 of Super Mario-Kun, Funky Kong lets Donkey Kong, Diddy Kong, Mario and Yoshi ride the plane. The plane's flight goes awry, however, turning the plane upside-down and dumping the four into the ocean.