Elevator Antics takes place in a cave and it is the only level to have elevators, which Donkey Kong and Diddy Kong use to travel up and down in the level. In the first half, the Kongs must climb ropes, crawl under tight spaces, and avoid Slippas and Mini-Neckys. Both enemies make it harder for the Kongs to travel through the crawlspaces. There are some black drums along the way, and they spawn an unlimited number of Slippas. Some of the Zingers fly around the ropes in either a vertical or a horizontal pattern.

The second half is different from the first because the Kongs must ride both ascending and descending elevator lifts to progress in the levels. The Kongs must quickly jump from the descending elevators before they get carried down an abyss, although some secret areas can be accessed by taking the elevators below, including a Bonus Level. Klumps appear on the ground areas during the latter half, and some Zingers fly around the elevators. Near the end, after the letter G, the elevators slide up and down the poles less often; therefore, the Kongs must jump between platforms right as they reach either the top or bottom of a pole. All three Bonus Levels are accessed by walking into a hidden wall opening. 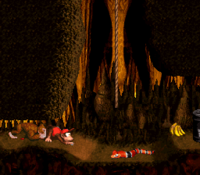 The level begins on a large ledge with a trail of bananas at the end of it that lead to a pathway holding a few Slippas and an egg-shooting Mini-Necky. The letter K can be found above the enemies along some ropes dangling from the ceiling. After the Kongs cross a small gap that follows a lone Slippa, the heroes can find another one of the snake enemies and two low ceilings that they must crawl under. A small area is between the two ceilings with a few Slippas in it, who have been spawned by a black drum found against a wall after the second low ceiling. A Banana Bunch sits next to the drum near a rope that can be climbed to reach an area with a Mini-Necky in it. The primates can find a DK Barrel and a black drum that releases Slippas ahead of here. A wide gap follows the drum, but it can be crossed with a trio of ropes that hang above it. A Zinger flies around one of the ropes. Three low ceilings are ahead of this abyss with a small space between each ceiling. The first space contains a single Zinger, but the second holds two Zingers and a trio of bananas.

Once the heroes pass through this area, they can find an abyss that can be crossed with the use of a few ropes that have Zingers flying all around them. If they manage to reach the other side of the gap, they can find a low ceiling that they can crawl under to find a small area with a thin gap in it. A rope hangs down through the center of the gap to help the heroes lower themselves into a small area consisting of a DK Barrel and a black drum that shoots out Slippas. A Zingers tries to get in the Kongs' way as they descend. Ahead of this gap, another low ceiling can be discovered with a large abyss right after it. Four ropes are within the pit the help the heroes cross, but a pair of Zingers get in their way as they travel along them. Two low ceilings that the duo must crawl under are on the other side of the abyss, and the small room between them contains a Slippa-shooting black drum. A rope is located after the second ceiling that the heroes can climb to reach a higher area with a Mini-Necky and the level's Continue Barrel.

A ledge holding a Klump is near here with a large abyss after it. Two elevators carrying platforms full of coal are in the gap that the heroes can use to cross. A small platform holding a Banana Bunch is between the two elevators at the bottom of the abyss. Once this pit is crossed, the two friends can find a steel keg and straight pathway with a Mini-Necky flying over it. Another gap full of coal-carrying elevators is ahead of here. The first elevator can lead the primates down to a small ledge supporting the letter N. Once the abyss is crossed, they can reach an area of several stair-like structures that a few Klumps walk along. The heroes can find another wide abyss after a steel keg that stands on the edge of the platform. A Zinger in this abyss guards a single elevator that can help lift the Kongs onto a higher piece of land, where two Klumps can be found. If they drop down to a lower piece of land near here, they can find another abyss ahead of them with more elevators in it. Two stationary Zingers float at the bottom of the pit, which is followed by a solid pathway supporting Klumps. A DK Barrel that can free any missing Kong when opened wobbles above the pathway. Three elevators convey platforms in an abyss ahead of here, which is infested with Zingers. The pit is followed by a large area of solid ground with a Mini-Necky flying above it. 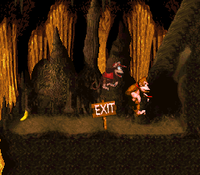 The Kongs reach the end of the level

Another abyss is after the foe with a single elevator and a Zinger in it. On the opposite side of this pit, a sign indicating that the level is near complete stands with the letter G above it. A Mini-Necky shoots eggs at the Kongs to the right of it, where a deep gap can be found with an elevator carrying platforms all the way down it. The two friends can ride down on one of the platforms to reach a lower area with another elevator moving platforms upwards. Before falling into the abyss below, the heroes can jump onto one of these platforms to be raised into a higher part of the level, where a tall structure holding a Zinger stands between them and another elevator that pulls platforms downwards. The can jump over the structure and reach the platforms to be lowered back to the bottom of the area, where another Zinger and an elevator are present. Before being lowered into an abyss, they can hop over the Zinger and onto one of the platforms being pulled up by the elevator, which lifts them up to a ledge with a tire on it. The object can be used to bounce onto a higher area with a Mini-Necky and a small abyss containing another elevator. With the aid of the moving platforms on this device, they can cross the abyss and reach an area with the exit ahead of it, found after an exit sign.