It has been requested that more images be uploaded for this article. Remove this notice only after the additional image(s) have been added. Specifics: Remaining K-O-N-G Letters, consistent screenshots.

It has been requested that this article be rewritten. Reason: poor writing

Ice Age Alley is the nineteenth level of Donkey Kong Country and twentieth in the Game Boy Advance remake. It is the third level of Gorilla Glacier, or the fourth in the remake (as its position was swapped with Croctopus Chase). This level has two Expresso Crates in all but the Game Boy Color version.

Ice Age Alley is a continuation of a snowstorm that started in Snow Barrel Blast; the weather effect works in reverse, as the snowstorm slowly clears up until finally stopping at the end. As a result, the screen is less visible from the snowy effect, but slowly clears up as the level progresses.

In this level, Donkey Kong and Diddy Kong have to trudge up the level on slippery ground. They must cross over pitfalls by swinging on ropes and jumping on bouncy tires. Enemies that the Kongs encounter include: Kritters, Klaptraps, Manky Kongs, Neckys, and Mini-Neckys. The Kongs can optionally ride Expresso through the level, as his animal crate is located on a platform behind the level entrance. The Kongs can use Expresso to glide over the pitfalls and even reach a normally unreachable Bonus Barrel. 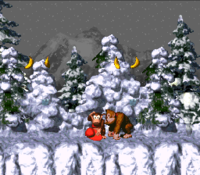 The primates stand in the middle of the level

The level begins on a flat piece of land. If the Kongs travel backtrack of ground from here, they can find a Mini-Necky, the first DK Barrel in the level, and a platform with the Expresso Crate. The letter K and a tire, used to help the heroes jump back up to the main path, are also present here. If the primates travel east along the main path, they can find a hill leading up to an alcove with another Mini-Necky in it. They can swing over the space in the ground with the use of a nearby rope. After traveling up another hill and passing a lone Kritter, the Kongs reach a wide gap with a rope swinging above it. With the assistance of a Necky that they can bounce on, they can cross the gap and land on a raised piece of land.

A flat pathway is located at a lower elevation ahead of this area, and a few Neckys soar above it. After the heroes pass a Mini-Necky and climb over a hill at the end of the flat surface, they encounter an abyss with another rope hanging over it. They can swing over the abyss onto a curved piece of land with a Mini-Necky and a DK Barrel on top of it. A steep hill follows, but there are two deep gaps along it that the heroes can fall through. A Klaptrap marches along the platform floating between the two gaps. Three ropes swing over a abyss nearby. When the gap is crossed, the duo approaches a small gap with the letter O in it. A Mini-Necky attacks from a higher piece of land on the other side of the small pit. Another abyss is present ahead with a Blast Barrel near the end of it. A Continue Barrel floats above it, which can be reached with the use of a rope.

The Blast Barrel immediately blasts the heroes onto a flat, solid surface with a gap ahead of it. A platform supporting a Klaptrap and a DK Barrel can be found above the dangerous pit. The Kongs can find a slippery hill ahead of them that they must slide down as a Manky Kong hurls barrels at them. Once they reach the bottom of the hill, they can find another large gap ahead of them. A platform with a tire on it is placed in the center of the abyss, and two ropes surround it. With the aid of the ropes, the heroes can cross and land on a slanted platform. Another slanted platform floats in an abyss. The slanted area continues on the opposite side of the pit. Once at the top of the hill, the heroes can find a flat ledge below them with a steel keg resting on it. Two snowy platforms supporting Klaptraps are in a gap ahead. The letter N is located on a hidden platform near here. A DK Barrel wobbles in a flat pathway after the two platforms. If the primates climb to a top of the hill that follows this barrel, they encounter a Manky Kong, who tries to hit them with barrels. A gap with a rope dangling above it follows with a Necky at the end of it.

A trio of slippery platforms with the letter G near them are also ahead. After passing the three platforms, Donkey and Diddy Kong make their way onto a solid piece of land with a sign on it, indicating that they are almost done with the level. As they continue through the level, they tread up a steep hill with a pair of gaps in it. A Manky Kong throws barrels at the heroes as they climb the lower part of the slope. A slanted pathway leading downwards can be found from the top of this hill, which a Klaptrap walks along. At the bottom of the hill, a gap can be found with a Banana Bunch in it. Once the gap is crossed, the primates can find the entrance to an igloo next to an exit sign. If they enter the igloo, the level is completed.