Blackout Basement is both the second and last factory level. The level has a unique feature where the lights flicker on and off every few seconds and throughout the entire level. While the surroundings are entirely dark, the only things visible on-screen are the Kongs, items (such as bananas), barrels, and faint outlines of platform edges. Because of the flickering lights, the Kongs must be cautious with their movements. The enemies are not visible while the level is dark. There are several pitfalls which Donkey Kong and Diddy Kong can cross by using floating platforms and swinging ropes.

To make things worse, the level is filled with many ropes, moving platforms, and even pitfalls, which the heroes can fall into if they aren't careful where they step. Many enemies are also scattered everywhere to bump into the Kongs when they can and cannot see. Enemies in this factory level include Kritters, Klumps, Klaptraps, and Manky Kongs. With the short moments of bright light, the heroes have to make their way cautiously through the level.

In the Game Boy Color version, the surroundings do not go completely dark but rather become slightly lit, making platforms and obstacles still visible somewhat. 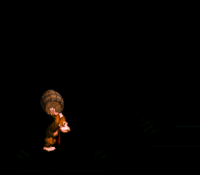 Donkey Kong holds a barrel during the blackout

At the beginning of the level, the Kongs travel down a long set of stairs with the level's first DK Barrel at the bottom of it. A Kritter marches along a flat piece of ground after a smaller stairway. Another stairway with a Kritter at the top of it can be found after a nearby abyss. The Kongs can find a second pit after the foe with the letter K above it. They come up to more Kritter enemies as they travel down a stairway located after this abyss. The enemies are followed by another abyss that can be crossed with the aid of a stationary platform floating in it. The duo can find a group of bananas on a flat area of ground near here, which is followed by a much wider pit containing three stationary platforms.

An Enguarde Token hangs under the platform in the middle of this abyss, which is followed by a stairway holding a few Kritters. After climbing the stairs, the Kongs come up to an abyss containing a solid platform with a bouncy tire sticking out of it. The tire can assist them in crossing the abyss and reach a series of platforms that are connected by stairways that Kritters march along. A DK Barrel wobbles on the highest platform, which is then followed by a larger platform with a wide abyss after it. Three platforms float above this abyss, each with a bouncy tire on it that the primates must bounce on to jump higher. On the other side of the pit, the two friends can find a solid area of ground with a small section of it that can be broken to reveal the letter O. The level's Continue Barrel floats above and abyss with a platform supporting a tire under it.

After the Kongs cross this abyss, they reach a set of two platforms that are connected by a stairway that holds a Klump. An abyss is ahead of here, but the primates can easily cross it with a rope. On the opposite side of the pit, they can discover another pair of platforms that are connected by a set of stairs supporting a Klump. An abyss stands between these platforms and another, and a smaller platform hovers across it. The duo can use the platform to cross and then reach another abyss consisting of another small platform that moves in a vertical path above it. It can be used to cross the pit and reach a higher area that connects to another piece of ground with a stairway. A Klump travels along the stairs. A rope swings in a wide abyss ahead of here. The Kongs can grab onto it as it swings to glide over the abyss and then reach a large platform with a DK Barrel above it. They can discover a wide pit nearby with two smaller platforms moving in vertical paths above it. With the use of these platforms, they can make their way over the pit and onto another large platform with a bigger abyss after it. This can be crossed with the use of two more small platforms that both pull them across different parts of it. 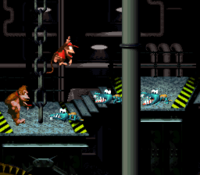 A trio of Klaptraps attacking the Kongs

Two pieces of ground connected by another stairway can be found on the other side of the abyss with a Klaptrap on them. A set of three platforms set up in a similar way to these is located after a small abyss that can be crossed with the help of a small, black platform in it that begins to fall when landed on. Several Klaptraps stomp along the platforms, which are followed by a wide pit that can only be crossed with the use of a few black platforms found above it. These platforms descend and then fall when landed on. The Kongs can find a steel keg on the other side of the abyss that is followed by a long series of platforms that are connected by short stairways. After passing a Manky Kong in this area, they head past a sign indicating that the level is near complete and then travel up a longer stairway. At the top of the stairs, they are attacked by a large group of Kritters who march along the ground and on a raised platform with the letter G above it. The enemies are followed by a ledge that drops the duo into a lower area with an exit sign in it. Before passing the sign to complete the level, a Klaptrap attacks the Kongs.