Coral Capers is the fourth level of Donkey Kong Country and of the first world, Kongo Jungle.

Coral Capers takes place in a large pond. It is the first level that takes place underwater and to have swimming controls. It is the first level to have no Bonus Levels, which are also absent from subsequent underwater levels in the game. Coral Capers has a variety of underwater enemies, all of whom make their first appearance in the level: Bitesizes, Croctopuses, Chomps Jr., Chomps, and Clambos. Squidges are the only aquatic enemies that do not appear in the level. Between the coral walls, there are many hidden areas with bananas, and one of them has an Expresso Token. 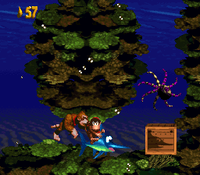 Two Enguardes are found in the level

At the beginning of the level, the Kongs swim through a wide underwater area containing a few Bitesizes and the level's first DK Barrel. A pathway leading north to the letter K and another area is ahead after a pair of Bitesizes. A channel stretching to the right of the letter K allows the heroes to access a square-shaped area with a large, coral structure in the center of it. A Croctopus swims around the area in a circular pattern. Another channel in this area leads to a large, open section with a lone Bitesize in it. An alcove at the bottom of the area, as hinted by a group of bananas shaping a down arrow, is where the animal crate with Enguarde is located. The swordfish can aid the Kongs as they head north through a long passage, making their way into another square-shaped area with a coral structure in the center of it. A Croctopus circles this structure, which has a Life Balloon to the right of it. A channel in the left part of this area leads to a wobbling DK Barrel and a curvy passage that takes the Kongs into a wide section with a few Bitesizes. The Continue Barrel is farther into the area, next to a passage facing south.

Three gaps are above this passage: the one farthest to the left contains a Banana Bunch, the one in the middle holds the letter O, and the alcove on the far right carries a single banana. Once the heroes head down the aforementioned passage, they access another square-shaped section with a piece of land in the center of it. As before, a Croctopus circles the area. An animal crate containing the second Enguarde also sits in the corner of this area, which the heroes can exit with the use of a small channel that helps them reach a wider area with a Chomps Jr. and a DK Barrel in it. A passage facing north immediately follows this barrel with a few Chomps swimming around in it. The heroes can find a hidden pathway over a wall to enter a hidden alcove containing a Expresso Token. Once the heroes reach the top of this passage, they can find the letter N and a channel with a wider area on the opposite side of it. Several Bitesizes swim through here. The long pathway widens even more after they pass a Clambo in an alcove. In this wider section, two structures can be seen in the center of the area with a Croctopus circling them. The Kongs can nab the letter G between them. An exit sign stands nearby, and once the heroes pass it, they complete the level. 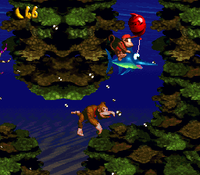 The Kongs and Enguarde swim up to the Life Balloon