A bonus room[1][2][3] (also known as a Bonus Area,[4][5][6] Bonus Level,[7][8] bonus stage,[9][10][11] or Bonus Game[12][13]) is a hidden area in the Donkey Kong games, particularly the Donkey Kong Country and Donkey Kong Land games. Bonus rooms are usually revealed either by finding a secret passage or by jumping into a Bonus Barrel. They usually have a challenge that the Kongs must complete to earn a prize needed for 100% completion. In Donkey Kong Country games developed by Rare, after the player has uncovered all the bonus rooms of a given level, an exclamation point is added after its title; in the Donkey Kong Land series, an exclamation point is still marked but is not appended to the end of the level title.

Diddy Kong throwing a tantrum after losing a bonus level. This also happens when the banana hoard is empty. 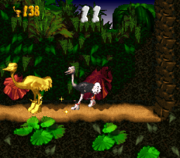 Expresso stumbling across a Big Animal Token in his Bonus Level 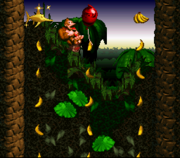 Donkey Kong in a "Collect the Prizes!" Bonus Level

Bonus Levels first appear in Donkey Kong Country. Here, they are entered by either breaking open certain walls with barrels or Animal Friends to reveal secret passages, or by jumping into certain Blast Barrels (changed to Bonus Barrels in the Game Boy Advance remake). In Oil Drum Alley, there is a Bonus Level entrance hidden within another Bonus Level, which can be entered by using a barrel to smash open its entrance. These rooms can only be entered once (except in the Game Boy Advance remake).

Unlike in subsequent appearances, the main idea of Bonus Levels is to obtain common items, such as bananas, animal tokens, or even a Life Balloon. The Kongs do not have to complete a challenge or collect the items within to add to their completion percentage—this occurs by simply entering the Bonus Level itself. There are 67 Bonus Levels in the game.

In the Game Boy Color remake, Candy Kong hosts a challenge in each world. The challenges are very similar to Bonus Levels, except for an award at the end (a Banana Bunch Coin); the challenges even have the same theme as a Bonus Level.

There are several types of Bonus Levels. In the Game Boy Advance version, each type received its own distinct title and splash screen:

*Levels with a (B) are accessed via a Bonus Barrel. Levels with a number (e.g. 2) tells how many of that type is in the level. There is also a specific type of Bonus Level that features an Animal Friend, either Rambi, Expresso, Winky, or Enguarde. Each Animal Friend's stage has a unique theme and layout, and some are based on their most common environment. Additionally, just like regular Bonus Levels, each of the Animal Buddy ones also received their own splash screen and title in the Game Boy Advance remake. The Bonus Levels revolving around Animal Friends do not reappear in any of the subsequent Donkey Kong Country or Donkey Kong Land titles. 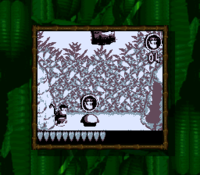 A new type of Bonus Level is introduced in the game. In it, the Kongs' collected Kong Tokens are shot out of a revolving Barrel Cannon. The cannon fires out one Kong Token a time, if DK or Diddy jump on a ground switch. By collecting a Kong Token, the Kongs win an extra life. The only other type, which is also the most common one, involves the active Kong trying to reach the end goal, much like "Find the Exit!" from Donkey Kong Country. 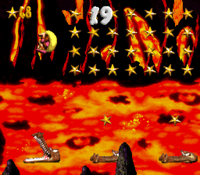 Dixie in a Collect the Stars! challenge in Hot-Head Hop from Donkey Kong Country 2

In Donkey Kong Country 2: Diddy's Kong Quest, Bonus Levels are entered much like in its predecessors, except that the Blast Barrels leading to a Bonus Level were replaced with Bonus Barrels. Every level has between one to three Bonus Levels. The types of Bonus Levels were narrowed down to three, none of which reappeared from Donkey Kong Country. Each type is a time-based challenge that the Kongs must complete to be rewarded with a Kremkoin. In the Lost World, every level only has a single Bonus Level, with a Video Game Hero Coin as a reward (given that Kremkoins' purpose is to unlock a level of the Lost World). Unlike in the first game, Bonus Levels can now be reentered. Bonus Levels were also featured in Donkey Kong Land 2 where their role is unchanged, and the same three types were retained.

The Bonus Level types first received their own title card each in Donkey Kong Country 2, and the title cards were retained for Donkey Kong Land 2: 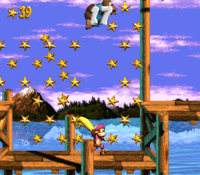 Dixie and Kiddy in a "Collect 50 Stars!" Bonus Level in Lakeside Limbo from Donkey Kong Country 3.

In Donkey Kong Country 3: Dixie Kong's Double Trouble!, Bonus Levels have a similar role as in Donkey Kong Country 2, except that all of them are accessed by entering a Bonus Barrel and none from breaking open a wall. The reward for completing a Bonus Level was changed from a Kremkoin to a Bonus Coin. There is always a consistent number of two Bonus Levels per level, except for Krematoa, where the number of Bonus Levels varies from zero to three. Rocket Rush is the only level without any Bonus Levels. All the Bonus Levels from the previous game returned (although with different titles), and a fourth, new type was introduced, "Grab 15 Bananas!". "Collect the Stars!" was renamed to feature the number of stars in the title, for example, "Collect 50 Stars".

Bonus Levels return in Donkey Kong 64, where they were renamed "bonus stages." Most bonus stages are accessible by jumping in a Bonus Barrel. Only the Minecart Race is the one that can be entered by entering a specific area. After the player has cleared a stage, the player is rewarded with a Golden Banana. Most of the stages can be played in Snide's H.Q. after collecting all Blueprints. The following is the list of all bonus stages in Donkey Kong 64:

Enguarde and Rambi each have an unlockable mini-game (somewhat in the style of a bonus stage) that can be played from the main menu. The minigames are respectively titled Enguarde Arena and Rambi Arena. Both games can be unlocked after capturing six Banana Fairies in the main game. These bonus stages are somewhat similar to the ones from Donkey Kong Country that feature an Animal Friend, as an Animal Friend are also the main feature of both mini-games.

It has been requested that more images be uploaded for this section. Remove this notice only after the additional image(s) have been added. Specifics: Add image here once uploaded for remaining levels that need them.

Bonus stages return in Donkey Kong Country Returns and Donkey Kong Country Returns 3D, once again accessed by Blast Barrels (as Bonus Barrels do not return in this game) and secret passages, although now with only one objective. The Kongs have thirty seconds to get all bananas, Banana Bunches, Banana Coins, and Red Balloons available. If they successfully collect all of them, the clock stops and a Puzzle Piece appears for them to collect.

Like in the past Donkey Kong Country games, the setting of a bonus stage depends on the world it can be found in, and it is always set in a cavernous or dimly lit room. Despite the aesthetic changes, bonus stages repeat themselves throughout the course of the game, meaning they are not unique to their levels, unlike in previous games.

A bonus room in Donkey Kong Country: Tropical Freeze. This one is from Mangrove Cove, although it reappears in other levels of the game.

Bonus stages appear in Donkey Kong Country: Tropical Freeze, having been renamed "bonus rooms" in the American English version. The objective of bonus rooms remains almost the same as in the previous game – the player has to collect all 100 bananas on-screen within thirty seconds, receiving an additional Banana Coin and a Red Balloon along with the Puzzle Piece. However, the setting of a bonus room is not related to the world it appears in anymore. Instead, all bonus rooms take place in what appears to be a treasury, with some of them being adorned with large statues in the background, suggesting they are connected to or branched off Secret Seclusion. As in the previous game, bonus rooms repeat themselves.