Donkey Kong travels through most of this level on a Rocket Barrel, which must be carefully controlled through narrow passages, falling ice structures, and snowballs that are shot from cannons. Even if he has one of his Kong partners with him, the Rocket Barrel can only manage two hits before it explodes. At the end of the level, Donkey Kong exits the Rocket Barrel and is shot into a giant snowball. The player can make the snowball jump over gaps as Donkey Kong rolls down the slope in it.

The music that plays in this level is an orchestral cover of "Mine Menace," which plays in Donkey Kong Country Returns.

Before reaching the Rocket Barrel, Donkey Kong must cross through the area on foot. Here, a Walnut stands on a raised structure and shoots snowballs from a cannon. The Rocket Barrel soon follows the nearby DK Barrel, which can release Diddy Kong, Dixie Kong, or Cranky Kong. The beginning of the Rocket Barrel section consists of groups of bananas and a few large ice structures that they must dodge. Different items, such as a Puzzle Piece, appear if all of the bananas in a group are collected. After the Kongs pass the letter K, pieces of the ceiling and large icicles begin to break and fall in their path. Ice and snow fall from behind as well, but they are unable to harm the Kongs. Once the Kongs traverse a narrow passage of ice, they enter an open area, where the first checkpoint is found.

The fortress at the end of the level is destroyed by the snowball.

The Big Squeekly from the Crowded Cavern level of Donkey Kong Country Returns is located in a block of ice ahead of here, and its eyes follow the Kongs as they fly by. Several orange cannons are ahead of here that shoot large snowballs in various directions. The letter O follows a group of three cannons that shoot snowballs upwards. Donkey Kong must maneuver through the snowballs as they both rise and fall in his path. Afterwards, Donkey Kong and the other Kongs pass through a narrow passage of wooden planks that deal damage if touched. In the large area ahead of here, a sequence of three giant snowballs crash into the snow and launch smaller snowballs that the Kongs must dodge. This area is followed by a narrower section, where the Kongs must fly through the crumbling ice walls above and below them. The letter N is located within this section. The Kongs soon enter a large room, where two massive snowballs fall in the background. When they impact the ground, snowballs shoot upwards in the foreground. Donkey Kong must again maneuver through the snowballs as they launch upwards and fall. Another narrow passage is ahead, and it contains several groups of bananas and the letter G. Alongside the debris that constantly falls behind the Kongs, the walls also close in on them as they progress, requiring them to remain in the center of the passage. The checkpoint is located at the end of this area, and as the Kongs pass it, the Rocket Barrel begins to break down. It drops them into a Barrel Cannon, which then shoots them into a giant snowball nearby.

The snowball is positioned at the top of a massive, stone slope. The impact from Donkey Kong and the gang begins to push the snowball, with them in it, down the slope. Here, the player is able to make the snowball jump as it crumbles through wooden bridges, ice structures, and cannons. The snowball rolls over a bridge along the way with several Walnut enemies on it, but they have no effect on the snowball. Eventually, the snowball crashes into a giant fortress, destroying the fortress entirely. The snowball is also destroyed, leaving the Kongs behind on solid ground. The Slot Machine Barrel is located just ahead. 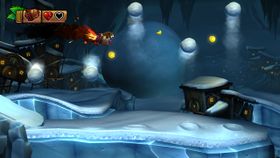 The Kongs must collect all of the items in this area to make a Puzzle Piece appear ahead.