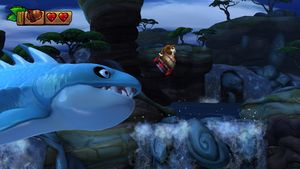 Horror Gills are large aquatic enemies found in a few vehicle-riding stages in Donkey Kong Country: Tropical Freeze and its Nintendo Switch port. They behave differently depending on their color.

A purple Horror Gills shreds part of a railtrack

Light-blue Horror Gills are only found in Twilight Terror, where they often emerge at the surface of the water and move in tandem with the Kongs, who fly a Rocket Barrel above the river. They travel in-between rock outcrops and often collide with underwater items, which are then casted towards the Kongs. They tend to knock over structures and cause them to potentially fall on the playable characters, damaging them. They can sometimes damage the Kongs directly by swimming in front of them with their sharp spine appendages. Near the end of the level, a light-blue Horror Gills is piqued by the Kongs and chases them down the river, only to fall down a cascade into a deep pond below. The Kongs can find it again if they dive to the bottom of the pond, where they encounter the fish immobilized and unable to cause harm.

Horror Gills of the purple variety are more aggressive and jump high above the water, trying to snatch the Kongs before diving back into the river. Aside from Twilight Terror, two purple Horror Gills make a minor appearance in High Tide Ride, where they jump out of the water to bite significant patches of railtrack and force the Kongs to jump over the newly-formed gaps as they ride in their Mine Cart. A Blue Hootz is eaten by one of these creatures in the process.