“Yikes, did we get blasted into the Bermuda Triangle or somethin'? You see all that gnarly wreckage out there?”
—Funky Kong, Donkey Kong Country: Tropical Freeze

Lost Mangroves is the first island in Donkey Kong Country: Tropical Freeze and its Nintendo Switch port of the same name. As the name suggests, this island is covered in mangrove trees, with many reaching enormous sizes. The island is home to many coves, forcing the Kongs to swim and introducing underwater mechanics. Some of these coves feature the remains of large shipwrecks. In addition to the shipwrecks, many crashed planes are also found on the island. This island also introduces mine carts. Many Snowmads and their ships are found here, particularly Tuckses. Other enemies include Dozies, Monocle Monicas and Punchy Paddies. The boss of this world is Pompy. 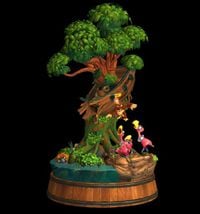 The following is extra content that can be unlocked in Lost Mangroves. The unlockables can be seen in their respective galleries after selecting the "EXTRAS" option. For a full list of extras in the game, see here.

A soundtrack selection for this world can be unlocked after beating Pompy, the Presumptious.