Juicy Jungle is the fifth world of Donkey Kong Country: Tropical Freeze and its Nintendo Switch port of the same name. The world is opened after defeating Fugu, the boss of Sea Breeze Cove. Bashmaster serves as the boss of this world.

As its name suggests, the world takes place in a fruity jungle area, where fruits can be harvested. Large berries and fruits, along with spiked variants, act as obstacles and platforms, either hindering the Kongs' way or helping them. Fruit juices form pools that Kongs can swim into, allowing them further exploration inside them. Some variants of Snaggles seem to live inside the juice pool. Another striking feature is the factory inside the jungle, which is used to process the fruits they harvested and make fruity snacks such as jelly and popsicles. Jellies are used as a trampoline to spring, while popsicles and frozen fruit juice blocks serve as platforms or obstacles that can hurt Kongs. Fruit cutting knives, fruit crushers, mincers and other sharp objects serve as deadly obstacles in this world.

Other than Snowmads, enemies in this world are heavily focused or based on fruits and berries, such as Bouncelisks and Toucan'ts.

According to pictures in the art gallery, this island is the homeland of Professor Chops and his people, who established and operated fruit factories under Snowmad surveillance. In the game, the factory appears to be entirely automated. 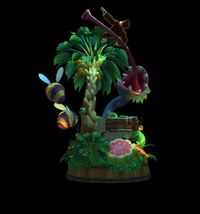 The following is extra content that can be unlocked in Juicy Jungle. The unlockables can be seen in their respective galleries after selecting the "EXTRAS" option. For a full list of extras in the game, see here.

A soundtrack selection for this world can be unlocked after beating Bashmaster, the Unbreakable.