Bright Savannah is the third world of Donkey Kong Country: Tropical Freeze and its Nintendo Switch port of the same name. The world is opened after defeating Skowl, the boss of Autumn Heights. Ba-Boom serves as the boss of this world.

The majority of the levels in this world are based on the landscapes of Africa. The flora and the fauna also resemble their African variants, such as the baobab tree and fruits, and the Buffaloafer being based off the African buffalo. Some of the levels are based on natural disasters that occur in Africa, such as tornadoes and wildfires. The Snowmads also have a fish processing plant in the area, likely for both food and ammunition. Many prohibition signs with Donkey Kong's tie on them can be seen in the background in multiple levels. 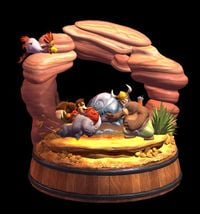 The following is extra content that can be unlocked in Bright Savannah. The unlockables can be seen in their respective galleries after selecting the "EXTRAS" option. For a full list of extras in the game, see here.

A soundtrack selection for this world can be unlocked after beating Ba-Boom, the Boisterous.