The level is similar to the first level Pirate Panic, as both take place on a ship deck with several enemies, gaps, and hooks. Diddy and Dixie must jump from the hooks to reach higher areas or for moving across gaps. Neeks make up a majority of the enemies. Other enemies include Krunchas, Klomps, and Kaboings, the latter of which make their first in-game appearance in the level. Just before the Star Barrel, the Kongs can optionally enter an Animal Barrel to transform into Rambi, who can help by defeating enemies along the way. Even after the No Animal Sign, the Kongs must jump from some more hooks before reaching the end. The Video Game Hero Coin and Bonus Barrel are in a gap just after the letter G.

Although Gangplank Galley bears many similarities with its Donkey Kong Country 2 counterpart, it does not have an Exclamation Point Barrel. 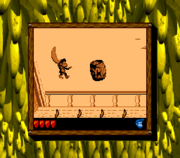 At the beginning of the level, the primates find themselves in front of some large barrels that support bananas and around a single Neek. The stack of barrels to the left of the Kongs sits under some hooks that they can climb along to reach a Banana Coin and some bananas. After passing the Neek, the heroes come up a stairway with another Neek at the top of it. Two ledges are ahead of here, and a DK Barrel with some bananas under it is between the ledges. Once they make their way down the second ledge, they come up to some large barrels that they can jump on to reach a few bananas and the letter K. A smaller barrel that the Kongs can carry and a Neek are in front of these large barrels, which are followed by another Neek and a Klomp.

Two additional Neeks are at the top of a stairway ahead of here, and they are followed by a small pit with an Extra Life Balloon in it. The heroes can find a ledge ahead of here, along with a Neek and a thin stack of barrels with a Banana Bunch above it. If they travel farther ahead, they find a large ledge with a hook to the top-right of it. Instead of dropping down the ledge to access the next area, they can climb on the hook and jump to a banana trail near it that is located under the letter O. At the bottom of the trail, the heroes can find more barrels piled up and another trail of bananas that lead off of the large barrels, where a Kruncha and a wide abyss are located. Three hooks are in the pit that can be used to cross. Once they pass over the abyss, the Kongs discover an Extra Life Balloon and a stairway leading to a Neek and a tall stack of barrels. An Animal Barrel appears just before the Star Barrel, and it transforms the Kongs into Rambi. A Neek is also found after the Star Barrel.

Two ledges are ahead of here, and when the Kongs climb it, they approach a few Neeks and a DK Barrel that floats next to a group of four large barrels with bananas on it. Another large barrel with a single banana on it is next to them. There are two more ledges after here that lead them down to a lower area with a treasure chest that contains a Banana Bunch, a thin stack of barrels with the letter N above it, and a Kaboing. Once they head up a stairway near here, they reach a Neek and a group of two large barrels placed next to each other. A Barrel Cannon is next to these barrels that can shoot the primates to a higher section of the ship, where there is a Banana Coin and a long, flat pathway with some Neeks and bananas on it. At the end of this flat area, the Kongs can find a ledge that drops them into a slightly lower area with a TNT Barrel and a Kruncha in it. 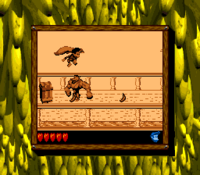 Dixie Kong hovers over a Kruncha

If they drop down the ledge ahead of here, the discover a DK Barrel and an additional ledge that leads them to a Kaboing and a No Animal Sign, which makes Rambi transform back into the primates if he has been freed from his Animal Barrel. A wide gap with four hooks above it is ahead of here. They must use the hooks to cross and reach a long platform with two Neeks and a Kruncha on it. They can also use the hooks to access a hidden Barrel Cannon that is able to blast them to the letter G and onto a hook high above a pit just ahead of here. If they drop down from here, they grab a Banana Coin and then grab onto a hook above the pit. With the use of a few more hooks, the primates can cross the remaining part of the pit, which contains the level's Video Game Hero Coin that is hidden above a Barrel Cannon. Once the primates cross the pit, they approach two stairways with Neeks walking along them. At the top of the stairs, they can find a crate, a few bananas, and a pair of Krunchas. After they cross a small pit ahead of here, they reach a Banana Bunch and a spring that can bounce them out of the level successfully.

Dixie is required to reach the Warp Barrel. From the start of the level, she must go backwards, jump on a pile of barrels, and then up to a hook. Dixie must jump to another hook and use her Helicopter Spin to collect a Banana Coin and two bananas. To the right of the collectibles is a hidden Warp Barrel. In the warp room, the Kongs can collect some bananas and walk out from the other side. This leads them directly to the End of Level Target.