“Squawks has relatives who can pick up barrels with their claws and bomb the baddies below.”
—Donkey Kong Country 3: Dixie Kong's Double Trouble! instruction booklet, page 17 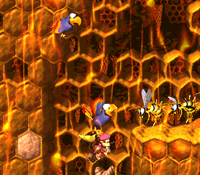 Dixie travels through the stage on Quawks.

Quawks only appears in one level of Donkey Kong Country 2: Diddy's Kong Quest, called Parrot Chute Panic. In this level, Diddy Kong and Dixie Kong encounter a few of them. They can mount Quawks by grabbing on its talons. Upon doing so, it then descends down the large Zinger hive. Unlike Squawks, Quawks cannot flap upward or spit eggs at enemies. It is defenseless, so it and the Kongs must carefully navigate around the enemies they encounter, usually Zingers.

Diddy and Dixie can dismount Quawks like the other Animal Friends. However it automatically releases them from reaching a certain point. Quawks indicates this from making a sound effect identical to Squawks spitting an egg (which does not occur in the Game Boy Advance remake). From there on, the Kongs must go through the level by foot until they find the next Quawks or until the level exit.

In Donkey Kong Land 2, Quawks reappears in the same-titled level, working just as he does in Donkey Kong Country 2; due to being on the Game Boy, both birds share the same sprites, and Quawks can only be used via Animal Barrel. 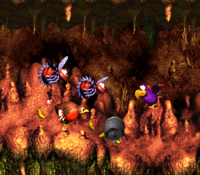 Aside from a redesign, Quawks has a significantly different role. However, he is still an uncommon Animal Friend as he only appears in two levels, Low-G Labyrinth and Buzzer Barrage. The Kongs do not ride him in either level, and must transform into Quawks from an Animal Barrel.

He still cannot spit eggs, but unlike his previous appearance, Quawks has a means of defending himself: by picking up a Barrel or Steel Keg with his talons and dropping it on an enemy. He can also fly upwards, like Squawks. Like the other Animal Friends, Quawks is playable until he reaches his associated No Animal Sign. Quawks is the only Animal Friend who does not appear in Dixie Kong's Photo Album.

Quawks appears as a usable red balloon item in Donkey Kong Barrel Blast, where he acts similarly to the Spiny Shell from the Mario Kart series; when obtained, he can be used to knock the racer who is in first place. If he is summoned by a Kong, the player who was hit will also lose all of their bananas. Unlike the Spiny Shell, it is possible for more than one Quawks to be in play during a race.