Krevice Kreepers is the twenty-first level in Donkey Kong Country 3: Dixie Kong's Double Trouble! It is also the first area of K3 and the first cliff-themed level in the game. In Krevice Kreepers, Dixie and Kiddy must ascend a mountain by climbing horizontal ropes and jumping on wooden platforms. Klasps are the main obstacle of Krevice Kreepers, and they are found along some of the ropes in the level. Klasps move in a set pattern or in the Kongs' direction; either way, the Klasps explode upon contact with the Kongs. A few Buzzes appear in the level, two Sneeks are found on small platforms in the level, and a Knocka guards the second Bonus Barrel.There are some hidden areas within the cliffside, such as the first Bonus Barrel, which the Kongs can find by climbing across a long horizontal rope with a Klasp on it, or toward finding the Koin. 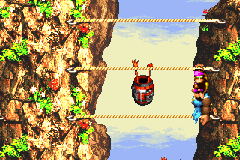 When the level begins, the Kongs will walk along a rugged pathway and grab onto a rope. They should climb up the ropes above it to find the letter K, as well as a high part of the mountain. Jumping to higher areas with more tightropes to the right, they will soon walk down a platform with a trail of bananas leading to a long tightrope. They should get on the rope and climb to the right, making their way onto some small, wooden platforms. Hopping upwards, they will pass a few enemies on the rigid landscape and climb up a few more horizontal tightropes. Eventually, the animals will head up a slanted pathway to the left and clamber up some more tightropes, finding a group of Klasps moving towards them. The monkeys will need to dodge them all an travel to the end of a vertical rope. After hopping to a horizontal rope to the right, the heroes will head over to another vertical rope, as well as the letter O. Making their way to the top of the area, they will notice a curved trail of bananas leading to a set of small, horizontal tightropes. They should jump to each tightrope, avoiding some Klasps, and soon land on a wooden platform with a Star Barrel on it.

About halfway into the level, the monkeys will continue to scale the mountain and find an Auto-Fire Barrel. The barrel will shoot them to a horizontal rope, which they should climb to the left on, dodging a lone Klasp. After doing so, they will find a few more wooden platforms to climb up. Following the platforms will be a set of tightropes, each one infested by a Klasp. The heroes will eventually hop up to a second Auto-Fire Barrel, which will shoot them onto more tightropes. The apes should clamber up the Klasp-covered ropes and soon find a third Auto-Fire Barrel. This barrel will shoot them to a long, horizontal rope. If the apes climb to the right on the rope, they will find a set of more ropes below them. Dropping down onto the ropes, they will need to climb across the bottom rope to find another set of ropes above them. Once Kiddy Kong and Dixie Kong make their way up these ropes, they will travel up a vertical rope to find another horizontal rope. The rope will lead them to the next set of ropes, which the monkeys should climb to find a higher area of the level. There, they will find an Auto-Fire Barrel on a cliff side. It will fire them to another long tightrope. If the heroes climb to the left on the rope, they will need to use a long, wooden platform to reach yet another set of ropes. If they jump upwards from all these ropes, they will soon find a pathway to the next group of ropes. This time, they will have to head downwards on the ropes, until they grab the letter G and fall to the ground. There, they will find a flagpole, and once they raise its flag, the level will end.