Tidal Trouble is the third level of Donkey Kong Country 3: Dixie Kong's Double Trouble! It is located in Lake Orangatanga, the game's first world. It is the second level to take place on a series of boardwalks, after Lakeside Limbo. There is a current in the water flowing left, in the opposite direction that Dixie and Kiddy must go. The Kongs must jump out of the water to continue moving against the force of the current. The Kongs must watch out that the current does not shift them into Kocos. On the boardwalks, the Kongs encounter Knockas, Buzzes, Booty Birds, and Knik-Knaks. A single Kobble also appears in the level (but does not appear in the Game Boy Advance version).

The second section of the level features more swimming. During the section, the Kongs must avoid the Buzzes above the water, as well as the Kocos in the water. A Lurchin is featured in a Bonus Level as well. For a brief part of the level, the Kongs can enter an Animal Barrel to transform into Enguarde, which is directly under the second Knocka. 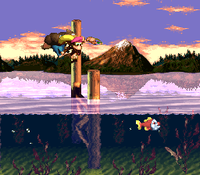 The Kongs begin the level under a small tunnel with a series of boardwalks ahead of it, which support a Koin. After passing the foe, climbing up a small ledge, and heading down a ramp, which contains a Kobble in the SNES version, the apes reach an area of water that they must swim through, with some individual bananas placed along the way, to reach another wooden platform. The letter K floats above the water, which contains a few bananas. Once they make their way onto the wooden platform, they can find a bear coin and a Buzz with a DK Barrel above it. As the primates travel ahead of here, they encounter a Koco in a long area of water. A thin, wooden structure stands in the water that they must hop over to move closer to a set of boardwalks that hold a pair of Knockas that are separated by a raised section of the platforms. An Animal Barrel that can turn the Kongs into Enguarde sits under the boards, and the letter O floats over the water after them. As the apes swim through the water, they encounter a few Kocos. They must maneuver over and under them to reach another set of boards that are supported over a pair of Kocos that block the way into a Bonus Barrel. After the primates travel across the flat boards, which carry a lone Knocka, they reach another area of water with a No Animal Sign in it. If they manage to pass a pair of Kocos and a thin, wooden structure in the liquid, they can reach a Star Barrel and a DK Barrel.

Two buzzes follow the DK Barrel: The first Buzz hovers under a bear coin over the water, while the other hovers above a thin, wooden structure. Four more of these thin structures are ahead, and as the heroes travel over them, they come past a Buzz, found between the first two structures, and a Koco, who is located between the last two structures. A trail of bananas near here leads the Kongs under another Buzz and a Koco. A second Koco swims to the right of the foes, and it is followed by a pair of Knik-Knaks that float over the shallow water. They can be bounced on to reach a raised platform with a Knocka and a Booty Bird on it. The bird enemy can be defeated to gain the letter N. If the primates choose not to jump onto this platform, they can head under it, grabbing a hidden bear coin on the way.

After they travel over or under the board, they approach a pair of Kocos that they must jump over to discover a thin and tall platform, which stands under a Bonus Barrel. They can find another pair of Kocos stacked on top of each other nearby, and these enemies are followed by an additional thin, wooden structure that is guarded by a Buzz that moves up and down. On the other side of the structure, the apes can find a DK Barrel and a banana trail that leads them under a Buzz and a Koco. Once they travel under these foes and dodge an additional Koco, they come towards another group containing a Buzz and a Koco, who are followed by the letter G, which floats over the rough water. A thin structure is ahead of here that the Kongs must jump through to reach a Koco and a set of boards that support a Knocka and a Level Flag. Kiddy Kong can be thrown at a crack in the ground immediately before the flag to reveal and opening with an Extra Life Balloon and a Barrel Cannon in it.

After passing the level's first Koco, the Kongs must jump onto a short platform. Kiddy must then throw Dixie northwest into the hidden Warp Barrel, which sends them to the Level Flag.