From the Super Mario Wiki, the Mario encyclopedia
(Redirected from K-O-N-G Letters)
Jump to navigationJump to search

“Keep your eyes open for those Kong Letters, they might be worth something!”
—Cranky Kong, Donkey Kong Country Returns

KONG Letters[1][2][3] (also formatted as K-O-N-G Letters,[4][5][6] K O N G Letters,[7][8] KONG letters,[9][10] or Kong Letters), also known as Golden Letters,[11] KONG Golden Letters,[12] or simply letters,[13] are recurring collectable items in the Donkey Kong franchise, first appearing in Donkey Kong Country. They are a set of four square-shaped objects, each displaying a letter of "Kong," and they appear in every level except boss levels. All four letters can be collected for a reward, usually an extra life; in some games, collecting them is mandatory. KONG Letters also serve as loose progress indicators, as the letter K usually appears at the start, the letters O and N appear midway through the level, and the letter G appears near the end.

Artwork of all four KONG Letters in Donkey Kong Country

KONG Letters appear in every level except for boss levels. The letters always appear in a specific location, either in plain sight or hidden. In the first Donkey Kong Country, a KONG Letter sometimes appears in a ground cache, and it can be unearthed by landing from above. In Donkey Kong Country 2: Diddy's Kong Quest and Donkey Kong Land 2, a KONG Letter is sometimes hidden inside a treasure chest, and in the former game, the letter G is sometimes a reward at an End of Level Target, such as in Krockhead Klamber. 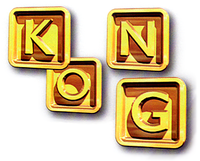 In Donkey Kong Country, yellow letters similar to the KONG Letters appear in the "Spell it Out!" Bonus Level challenges. In them, there are letters spinning around in a circle, and the Kongs must jump at the highlighted letters to spell out a word (such as "RARE" in Vulture Culture's first Bonus Level). In the Game Boy Advance version of Donkey Kong Country, the Kongs are required to collect every letter to add to the 101% completion, and the player can check the statistics for KONG Letters from the overworld map's

In the original version of Donkey Kong Country, the KONG Letter sprites sparkle and shimmer. In the sequels and Game Boy Advance version, however, they spin instead.

In DK: Jungle Climber, KONG Letters were renamed KONG Panels,[14] and they retain their role as collectible items. Like in Donkey Kong Country's Game Boy Advance version, the KONG Panels are required collectibles, and they grant an extra life if all four in a level are collected.

In Donkey Kong Country: Tropical Freeze and its Nintendo Switch port, KONG Letters retain their appearance and role from the previous game, Donkey Kong Country Returns. The Kongs must collect every KONG Letter in a world to unlock a temple level, which has a mysterious relic instead of a Rare Orb. On Hard Mode, the KONG Letters are colored blue; collecting them colors the star icon near a level's name from red to blue, although they are not required for 200% completion.