A Gloop is a smaller relative of Fangfish that appears only in Donkey Kong Land. They appear primarily in Kremlantis, but also make appearances in bonus rooms in other worlds. They have an appearance similar to a Moorish idol. They slowly swim back and forth horizontally, and as such, they are not actively aggressive. However, they commonly appear in pairs in narrow passageways, making them more difficult to get past. They also tend to swim near pits where Flappers are. 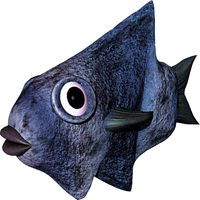