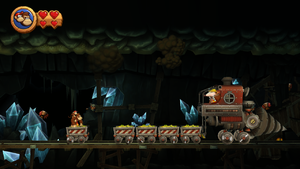 The train first appears in Mole Patrol. In the level, Donkey Kong and Diddy Kong ride a Rocket Barrel through a mine constructed by the Mole Miners. After a while, the train appears and throws out Mole Miners that are held aloft by balloons. The train eventually runs off-track and then continues drilling into the side of the cave.

The train is featured in the boss level, The Mole Train. Mole Miner Max is hypnotized by Banjo Bottom, and Mole Miner Max starts up the train. The Kongs ride a minecart, and the other four minecarts are attached to the train itself. Mole Miners pop out of the train carts to throw pickaxes at the Kongs. After the train goes down the slope, the four carts detach from the train, and the Kongs' minecart connects to the other four. When the Kongs stomp a Mole Miner, it falls out of the minecart. When Donkey Kong and Diddy Kong defeat every Mole Miner, a blue spark from the wheels of four minecarts, and they fall off the stage. Only one of the minecarts does not fall off.

After defeating two more groups of Mole Miners, the Kongs' minecart connects behind four minecarts that are connected to the train itself. Mole Miner Max jumps out the cockpit to fight the Kongs. After being hit a few times, Mole Miner Max is defeated, and the Kongs knock him back into the train's cockpit. The train's wheels stop moving and the drill breaks loose, causing the train to slow on the rails. The train stops at the discontinued rails over a wide pit. The train nearly falls off the tracks, but its drill breaks off and falls into the pit.