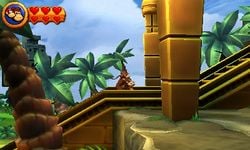 The Kongs climbing the stairs that lead to the Cloud Gateway

Cloud is the ninth world of Donkey Kong Country Returns 3D. After the game is beaten and eight Rare Orbs are collected from the game's Key Temple levels, the Cloud Gateway can be used to enter this secret world. In the original Wii version, Golden Temple was the ninth world in and of itself and was accessed directly from the Cloud Gateway, which was labeled as "9-1 Golden Temple".

Except for Golden Temple, none of the levels in this world are actually set in the clouds. Instead, each level represents all the other worlds, in order. This world has no boss, but the player is rewarded for clearing every level in this world. The reward is Mirror Mode, a game mode where levels are reversed and Donkey Kong must clear them without the aid of Diddy Kong or items, and with only one heart (two hearts in New Mode).

The world each level represents is mentioned within parentheses.