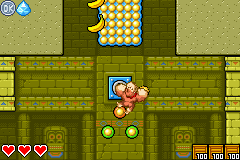 “Pull down the peg repeatedly to operate the mechanism.”
—DK: King of Swing instruction booklet

Jack Pegs[1] are a type of peg that appear in both DK: King of Swing and DK: Jungle Climber. Their purpose is to operate certain mechanisms. Jack Pegs consist of two pegs, one in the center and another at the end of the lever. Donkey Kong can repeatedly pull down on the lever if the player repeatedly presses

, depending on which side the lever is on. Many Jack Pegs are used to open up walls and create paths for Donkey Kong to climb up. These paths are only temporary as the Jack Peg eventually returns to its starting point, closing the walls. Jack Pegs are also found on metal bars, similar to Handle Pegs. If pulled on, they travel along the bar.

In DK: King of Swing, a Jack Peg is first seen in Puzzling Pyramid, where a Kremling is pulling on one. There are also Jack Pegs in Madcap Mine and Underwater Ruins.

In DK: Jungle Climber, Jack Pegs first appear in Spooky Woods, and are primarily featured in both Mega Amp battles. In both respective battles, Donkey Kong must activate a Jack Peg on the crystal on the Mega Amp's neck to eject the Kritter piloting the mech.