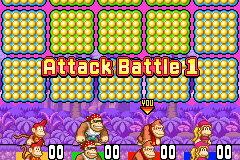 Attack Battle is an event in the Jungle Jam Tournament from DK: King of Swing. There are two battles that are simply named Attack Battle 1 and Attack Battle 2. The first battle is in a jungle setting. The player gets forty seconds. In order to win, the player must get the most points by blasting away the opponents. The player will gain three points if they blast someone, but lose one point if they get blasted. The player also must dodge a moving spike ball, called a "counter", on the ground. If touched, one point is subtracted from their total. The second battle is in a cacti-like setting, similar to Cactus Woods. Like the first battle, the player gets forty seconds. The objective is similar, but if the player is blasted into thorns, they lose one point.