Congazuma is the first boss of DK: King of Swing and the boss of Jungle World, where he is fought in the boss level, Congazuma's Castle. Congazuma's name is derived from the Aztec ruler, Montezuma. 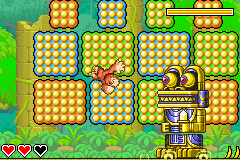 The boss fight between Congazuma and Donkey Kong

When Donkey Kong (or Diddy Kong in Diddy Mode) enter the arena, Congazuma is formed from the right side of the arena, where three parts of him precisely fall in place.

During the boss fight, Congazuma jumps around the arena in a back-and-forth pattern, attempting to hit into Donkey Kong (or Diddy Kong in Diddy Mode). If Congazuma hits into Donkey Kong, he loses a heart. Donkey Kong can easily attack Congazuma by hanging on the peg board and then charging into him directly. This causes Congazuma to flash red and become invulnerable for a few seconds; it makes a couple of short hops in a straight line and then reverts to normal. For each hit Congazuma takes, his short hops being his invulnerable state become even shorter, and he jumps farther while in a normal state. After taking four hits, Congazuma is defeated, and his segments and eyeballs break off. The gold medal appears on the floor in the center for Donkey Kong to obtain. If Donkey Kong defeats Congazuma in a rematch, he is instead rewarded with numerous bananas and Banana Bunches.