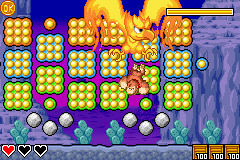 Fire Necky is a large, phoenix-like fiery Necky and the second boss of DK: King of Swing. It the boss of Wild West World and is fought during the level Fire Necky's Nest. According to the game's instruction booklet, Fire Necky is the leader of the Neckys. In Donkey Kong Country, there are also two Necky bosses, Master Necky and Master Necky Snr., which are notable members of their species.

Fire Necky attacks by trying to fly into the Kong (whether it is Donkey Kong or Diddy Kong) and engulf him in its flaming body. The player must avoid this attack and wait for the vulture to start spitting flaming rocks at them; Donkey or Diddy Kong must wait for the rocks to extinguish before picking one up and throwing it at Fire Necky as an attack. After being hit once, Fire Necky begins to slowly chase the Kong, still being vulnerable to rocks thrown at it. Once it is hit multiple times, the behemoth Necky is finally grounded. When it is defeated, Donkey or Diddy can collect the golden medal the creature was guarding and access the Aqua World. By obtaining it, the player unlocks Obstacle Race 2 to the Jungle Jams mode.

As mentioned before, Fire Necky is fought in a level known as Fire Necky's Nest. The stage features three rows of peg boards in order of colors, and many pegs around the outside. After Fire Necky shoots the small pegs, rocks are also created for use to attack it.